Tony Abbott criticised by own side for Prince Philip knighthood 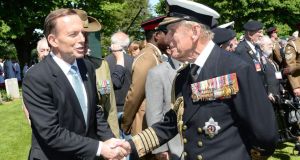 Australian prime minister Tony Abbott with the Duke of Edinburgh, Prince Philip. Mr Abbott said that while the duke had not called to thank him for the knighthood, he did not “expect gratitude”. Photograph: Tim Rooke/PA Wire

And the only person Mr Abbott consulted about knighting Mr Houston was governor general Sir Peter Cosgrove, who was knighted last year.

Mr Abbott, an ardent monarchist who reintroduced the Australia Day gongs last year, was born in England. Mr Houston was born in Scotland. Prince Philip was born in Greece, but is a long-time UK resident.

The prime minister said he was “really pleased” that Queen Elizabeth had accepted his recommendations on the knighthoods and added that while Prince Philip had not called to thank him, he did not “expect gratitude”.

Mr Abbott’s current standing with the electorate is so low – in a recent poll, only 50 per cent said he was competent, the lowest on record for a prime minister – that there have been grumblings about his future from within his own Liberal Party.

The grumblings grew louder on Australia Day, with many questioning the wisdom of what Mr Abbott said was a “captain’s call”.

One minister said: “There is an old saying that when you are in a hole you should stop digging. Well, we’ve just punched through the Earth’s crust.”

Others also made anonymous comments, but some were prepared to go on record.

“For the life of me I can’t understand why Prince Philip [was knighted]. I’ve got a dozen people in my electorate, any one of them would be more worthy,” said North Queensland MP Warren Entsch.

Opposition Labor Party leader Bill Shorten, who has called for a renewed debate on Australia becoming a republic, said Mr Abbott is caught in the past.

“On Australia Day, [when] we’re talking about Australia, Australian identity, the government’s managed to find a British royal to give . . . a knighthood to.”

The response on social media to the award was swift, with many questioning the logic behind the award. “The only explanation is that Abbott is actually a Labor sleeper and he got the call from Shorten yesterday that he’d been activated,” wrote one person on Twitter.

“I think that in the media, you make a big mistake to pay too much attention to social media. You wouldn’t report what’s sprayed up on the walls of buildings and look, as I said, social media has its place, but it’s anonymous,” he said.

As long as most of the internal party criticism of Mr Abbott is also anonymous, his job is safe. But if he keeps making decisions without first running it by his colleagues, more of them will stand up to be counted.

1 One hundred Irish retailers for all your online Christmas shopping
2 People who throw house parties can be fined €1,000 and jailed for up to a month under planned law
3 'It’s his dishonesty, lack of character, his deceit' - ex-CIA chief excoriates Trump
4 Covid-19: Backlog forces HSE to skip calls to thousands of close contacts
5 Brexit: UK government suffers heavy defeat over ‘law-breaking’ Bill in House of Lords
Real news has value SUBSCRIBE