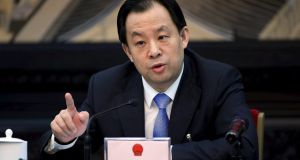 Lu Hao, the governor of Heilongjiang, gestures as he speaks at a Heilongjiang delegation group discussion at the National People’s Congress (NPC) in Beijing. Thousands of Chinese coal miners marched through the streets of a mining town in northeastern China over the weekend protesting against unpaid wages, as China grapples with rising unemployment due to overcapacity in heavy industries. Photograph: Reuters

Thousands of coal miners have marched through a city in China’s heavily industrialised northeast to protest over unpaid wages, according to local media reports. The region is one the worst affected by government plans to close unsustainable state-owned heavy industries.

The miners work at Shuangyashan Mine, owned by Longmay Group, Heilongjiang province’s largest publicly owned mining company and claim they have not been paid for months. They are angry that their pay has been cut to 800 yuan (€110) a month, from 1,000 yuan (€138), according to local media reports.

The state-owned enterprise (SOE) recently laid off 22,500 workers, the first in a round of what are expected to be massive redundancies.

The protesters in Shuangyashan city held up banners saying: “We want to live, we want to eat,” according to photographs posted on social media.

Longmay mining employs 224,000 people, which is three times the industrial average given Longmay’s scale of production, and it has suffered huge losses for many years, surviving on government subsidies, local media reported.

“If its capital chain breaks, even the government is not able to bail out such a giant,” Mr Lu told the delegates last week.

In the run-up to the NPC, the government announced that 1.8 million workers at state-owned coalmines and steel factories would lose their jobs, and some believe this number could rise to nearly six million in the next three years.

The ‘xiagang’, or laid off, workers toil in ‘zombie’ state-owned enterprises. There are widespread fears that bringing in such swingeing job cuts could lead to political unrest, similar to the protests in Shuangyashan. The government is setting aside €21 billion to compensate laid-off workers.

Heilongjiang is heavily reliant on “old enterprises”, the heavy industries that the government is trying to shutter in its bid to move up the value chain, and its resources businesses have been badly hit by the collapse in the price of coal and oil.

“It is most important that we have to train those transferred workers with new skills, create new market opportunities and encourage their willingness to run their own businesses,” Mr Lu said.