There were 22 shark attacks in Australian waters last year, one of them fatal 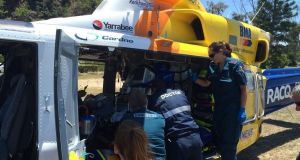 A handout image provided by RACQ Capricorn Helicopter Rescue Service shows paramedics treating a 31-year-old man who was attacked by a shark while spearfishing off Yeppoon in central Queensland on Friday. Photograph: EPA 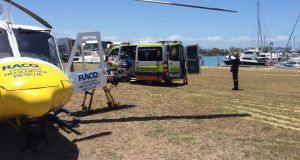 Paramedics treat a man who was attacked by a shark while spearfishing in central Queensland on Friday. Photograph: EPA

A man (30) is undergoing surgery after being attacked by a shark in eastern Australia.

The man was reportedly spear fishing when he was surrounded by a school of mackerel and was then attacked head on by the shark, ABC reported, citing paramedics.

The man fought off the shark although he suffered lacerations to his arms and legs and is undergoing medical treatment.

There were 22 shark attacks in Australian waters last year, one of them fatal, according to data compiled by the Taronga Conservation Society.

Most took place in New South Wales, which neighbours Queensland. Authorities there have stepped up aerial surveillance using drones to ease the concerns of beachgoers.

There are 165 shark species in Australian waters including the great white, tiger and bull shark.

None are thought to target people and specialists say attacks occur when a shark confuses swimmers, surfers and divers with its usual prey.