Many people evacuate from buildings in north Australia city 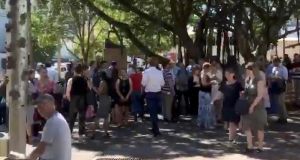 A strong earthquake has struck in Indonesia’s Banda Sea, with the tremor felt in the north of Australia.

The US Geological Survey said the magnitude-7.3 quake was centred 129 miles below the earth’s surface.

It was felt in parts of Indonesia and in East Timor’s capital Dili, as well as across Australia’s most northern city, Darwin.

Many people evacuated from high-rise buildings in Darwin after the quake rattled the city for around five minutes.

One worker, who gave her name only as Robyn, said no alarm had gone off but workers had decided to get out of her building anyway. She said it was the strongest quake she had ever felt in Darwin.

There were no reports of any damage or injuries as a result of the earthquake, and Indonesia’s geophysics agency said it did not cause a tsunami.

The Banda Sea tremor was recorded minutes after a magnitude-6.1 quake in a thinly populated area 144 miles west of Abepura, in Indonesia’s Papua province, at a depth of 12 miles.

Rahmat Triyono, Indonesia’s head of earthquake and tsunami centre, said the Papua quake was followed by several smaller aftershocks, but there was no immediate report of major damage or injuries.

Indonesia is prone to earthquakes and volcanic eruptions due to its location along the Pacific Ring of Fire.

A powerful Indian Ocean quake and tsunami in 2004 killed a total of 230,000 people in a dozen countries, most of them in Indonesia. - AP