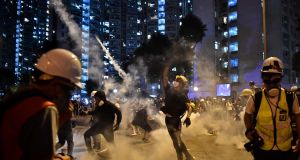 Protesters throw back tear gas fired by the police in Wong Tai Sin during a general strike in Hong Kong on Monday, which caused transport chaos. Photograph: Anthony Wallace/AFP/Getty Images

Hong Kong’s embattled leader refused to resign on Monday as the city was plunged into bedlam, with a rare general strike causing traffic chaos and protesters and police clashing in several districts across the financial hub. More than 200 flights in and out of the city were cancelled, the underground rail service and the tram system were not operational for most of the day, and roads and tunnels were blocked by protesters in several districts of the city.

Police said 82 people were arrested on Monday, mostly on charges of unlawful assembly and rioting, as protesters hurled bricks at several police stations and started fires in bins outside police complexes. Tear gas canisters and rubber bullets were fired to disperse crowds in multiple locations across the city.

At least 420 have been arrested since the protests began two months ago against a proposed piece of legislation that could pave the way for suspects being extradited to mainland China. Many have been charged with rioting, which can carry a prison term of up to 10 years.

Police have fired more than 1,000 rounds of tear gas and 160 rubber bullets since the rallies began, a spokeswoman said on Monday, adding that 139 police officers had been injured in the protests to date.

Beyond the proposed extradition Bill, the protesters say that Hong Kong’s legally enshrined rights and freedoms are being steadily eroded by the pro-Beijing government, and they claim the police have used brutality and excessive force at various points over the summer. They are calling for universal suffrage, an independent inquiry into the handling of the crisis, and are demanding that the city’s chief executive Carrie Lam step down.

At her first public appearance in two weeks, Ms Lam said at a press conference on Monday the protests have brought the city to the “verge of a very dangerous situation” but, despite widespread criticism of her leadership, she had no plans to resign.

“I don’t think at this point in time resignation of myself or some of my colleagues would provide a better solution,” she said. She said the protesters were “trying to destroy Hong Kong” and had “ulterior motives” that threaten the city’s “one country, two systems” principal, which affords the financial hub certain freedoms not granted on the mainland.

While she called on the city’s citizens to “rally together”, her comments seemed to only further enrage the protesters, who accuse her of being a puppet figure manipulated by Beijing. “She is so arrogant and clearly could not care what normal Hong Kongers think or want,” said one young protester, who was part of a group pelting bricks and petrol bombs at the police headquarters in Wanchai district late on Monday night.

“I was not even going to come out and protest today as I had other things to do, but then I heard her speech this morning and I lost my temper and felt I had to come out to show my anger,” the man, who asked not to be identified, said. In an unprecedented move in a city where trade unions are traditionally weak, the city was paralysed on Monday as an estimated 27,000 people, many of them civil servants, participated in a strike in support of the protests.

Many others called in sick or engaged in acts of non-co-operation and civil disobedience, bringing the city which has long prided itself on its efficiency and orderliness to a virtual standstill. Numerous shops, banks and offices were shuttered across the territory.

Fighting broke out on Monday night in two neighbourhoods between protesters and mobs of men wielding long wooden poles and knives, in attacks reminiscent of an assault on protesters in a train station two weeks ago by suspected triad members. More than 40 were injured in that attack and protesters accused the police of colluding with the gang to violently break up the protests. There were unconfirmed reports of some protesters being stabbed in the attacks late on Monday night. Police said the identity of the mobs was still unclear.

They say they have the right to protest, but what about my right to not protest?

During rush hour on Monday morning protesters blocked subway doors from closing, threw objects on train tracks, and set off fire alarms in train stations. They barricaded roads across the city, and several drivers intentionally clogged roundabouts and junctions. While many were supportive of the action, there were several scuffles throughout the day between commuters and protesters.

“How dare they behave like bullies and try to dictate what everyone does in Hong Kong,” said Angie Lau, a finance worker who was stranded in a train station on Hong Kong island.

“They say they have the right to protest, but what about my right to not protest and get on with my work and my life?” she said. “I used to be quite supportive of the protests, but they have no plan how to end this. It will just go on and on.”

A protester named Andy Lee said it was up to the Hong Kong government and Beijing to come up with a solution. “They caused this mess. They are the problem, they need to fix it,” he said.