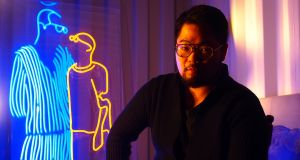 The Shanghai-born satirical cartoonist and artist known by his pseudonym Badiucao, who has drawn comparisons to the graffiti artist Banksy.

A prominent Chinese political cartoonist came out of the shadows lately and revealed his face for the first time, hoping the increased publicity would give him an added layer of protection from Beijing – but despite being overseas he still lives in fear of government reprisals.

The satirical cartoonist and artist, known by his pseudonym Badiucao, has been using his pen to anonymously skewer China’s leaders and their human-rights record for more than a decade. The 33-year-old Shanghai-born artist, who has drawn comparisons to the graffiti artist Banksy, showed his face for the first time in a documentary on his life released in June called China’s Artful Dissident.

He was forced to cancel a major exhibition in Hong Kong at the last minute last year when it became clear the Chinese authorities had discovered his identity and approached his family in mainland China. Two policemen visited family members and one was taken to a police station and interrogated for hours. He had told none of his family or associates about his political artwork so they were in the dark, but the police pressured them nonetheless.

“They were told to ensure the exhibition was cancelled, “or they would show no mercy”, he told The Irish Times. “It was intimidation, just a terror tactic to make me shut up.”

The work for the show included a portrait of Chinese president Xi Jinping and Hong Kong’s chief executive Carrie Lam with their faces merged to highlight concerns that Beijing is asserting its authoritarian tendencies in the territory. Another featured the late Chinese dissident and Nobel laureate Liu Xiaobo and his widow Liu Xia in their final embrace, while several pieces satirised Google and its plans to introduce a censored search engine to the Chinese market.

After undergoing months of preparation for the show he was devastated the event had to be called off but with news his family had been targeted he and the organisers felt there was no option but to cancel. Badiucao went to ground for a spell to consider his options but he knew he was by then squarely in China’s crosshairs: he started getting death threats online, his email and website were hacked, his home locks were tampered with, and he was obviously followed on some occasions in Australia where he was spending most of his time.

“It was all very scary, very concerning,” he said.

After months of deliberation he felt the best way to protect himself was to increase his international profile so he decided to reveal his face during the documentary, which was launched on the 30th anniversary of the Tiananmen Square massacre in China in June 1989.

“Those young bodies can be crushed by the tanks, but their spirits live on and they gave me the power to step out,” he said, adding that “I don’t want to be silenced. I had to come out. If I chose to be silent and stop being an artist then I would regret it for the rest of my life.”

Revealing himself “sounds like a suicide mission”, he said, “but if I fade away from the public eye I am probably giving the Chinese Communist Party more space to attack.”

While he has abandoned his trademark multi-coloured balaclava, he still keeps his real name and personal details under wraps and has severed communication with his family to make them less vulnerable, he said.

His family are acutely aware of the inherent risks involved in art and politics in China. His grandfather and granduncle were pioneering film-makers who were sent to labour camps during the anti-rightist purges in the 1950s. His grandfather died in a cell and his granduncle took his own life in a labour camp. Growing up an orphan, Badiucao’s own father carried the life-long curse of being the “son of a dog” – the offspring of a creative talent who fell foul of the Party.

With painful family history “casting a huge shadow” over his upbringing, he was heavily encouraged to ignore his innate artistic talents so Badiucao enrolled in university to study law. But on one life-altering day in college he and his room-mates were watching a downloaded bootleg film when suddenly it cut to a documentary that apparently had been spliced in.

The documentary showed three hours of footage of the 1989 Tiananmen massacre, and the four room-mates sat in stunned silence as they watched the tanks, the troops, the students and the deaths.

“I could not believe it. But I could not deny it either,” he said. “How is this amnesia possible? How come no one talks about it? I was the same age as the students at the time [they were killed]. Massacred – blood and mayhem. I knew then I had to get out of China.”

Soon afterwards he found himself in Australia pursuing a second degree in education and later teaching pre-school. Sharpening his pencil and political awareness, he became a kindergarten teacher by day and a caped cartooning crusader by night.

He started posting on Chinese platforms but had his work erased countless times before he moved to the social media platforms Twitter and Instagram, which are banned in China. He quickly found big followings there, and, beyond editorial cartoons, he enjoys engaging in street art, performance art, fine art, installations and photography and video.

Focusing on Hong Kong recently Badiucao produced a range of timely and satirically biting anti-government illustrated work related to pro-democracy protests and a controversial extradition Bill, and the work featured prominently at mass marches over the past few weeks.

He takes some of his concepts across forms, as with his iconic imagery of the jailed Liu Xiaobo and his wife Liu Xia. Several images were painted on walls in Melbourne; sketches online went viral and were downloaded millions of times all around the world; it was developed as a neon installation for exhibits; and the concept featured in a performance piece where Badiucao dressed as Liu Xia and drew attention to her cause in front of the Mona Lisa in the Louvre.

On the anniversary of the Tiananmen massacre last year Badiucao ran a public participation art campaign where he asked people to be “Tank Man” and “Tank Woman”– saluting the solitary figure who stood with his shopping bags in front of the advancing tanks in 1989. Images came in from all around the world of people dressed as the original Tank Man – in black shoes, black pants and white shirt – standing rigidly in a public space holding two shopping bags.

“The Tank Man symbol is not just about China, but is a symbol for human rights and standing up against abuse around the world,” he said. “We are all Tankmen.”

Badiucao has launched a campaign to ask Twitter to agree to a commemorative Tankman hashtag and emoji; he asked them in advance of the 30thanniversary but they declined.

“I think the excuse they gave was vague and fake,” he said. “The real motivation is they want to make money from the Chinese market. But I don’t give up easily, I will arrange a big campaign to pressure them.”

Like his friend and mentor Ai Weiwei, sometimes he feels like an artist, but at other times he seems as much an activist or social commentator. He is driven, he says, primarily to highlight human-rights abuses in China and its attempts to whitewash history, but he also turns his talents wider afield occasionally, such as his work on recent refugee crises.

“Situations where people have lost their voice or lost their freedom – then I want to draw them,” he said.

On a personal level he said he does not see how he can revisit his homeland anytime soon, and as a result of that and his personal security concerns he feels isolated. “I am really lonely and feel depressed from time to time,” he said, adding that he expects China to remain autocratic for some time to come.

“China is a digital dictatorship ... and the Communist Party is very rigid,” he says. “The way it operates is not a way it can help ease tensions in society. It is almost inevitable change will come at some time, but who knows when.”

In the meantime he thinks Western governments should do more to try to understand China and coax it to become a freer, more democratic country – but on that front he is not very optimistic.

“Western governments are not doing enough because they have very short vision, and they are attracted to short-term profits [in China] – I am probably the most cowardly person you know, that’s why I take so many precautions,” he said. “But it is okay to be a coward as long as you can make a change. Fear will not fade away just because you look away.”