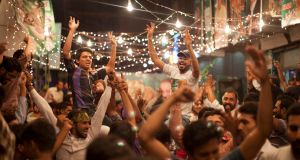 People celebrate in the streets of Lahore, Pakistan, after Nawaz Sharif, a former prime minister, declared that his party, the Pakistan Muslim League-Nawaz, would emerge as winner of the election. Photograph: Tyler Hicks/The New York Times.

Toppled in a 1999 coup, jailed and exiled, Nawaz Sharif has made a triumphant election comeback and today was heading for a third term as Pakistan's prime minister.

The polls were a landmark, marking the first time one elected government was to replace another in a country vulnerable to military takeovers.

But yesterday's vote failed to realise the hopes of many that dynastic politics would end after years of misrule and corruption in the strategic US ally.

Mr Sharif (63) a wealthy steel magnate from the pivotal Punjab province, held off a challenge from former cricket star Imran Khan who had hoped to break decades of dominance by Mr Sharif's Pakistan Muslim League (PML-N) and the

Mr Khan's Tehrik-i-Insaf (PTI) put up a strong fight and he is likely to remain a force in politics.

"Nawaz's victory says two things about Pakistan: one, the people of Pakistan prefer the comfort of status quo over the uncertainty of revolutions; and two, all roads to the centre go through Punjab, and in Punjab, people are right-leaning and conservative," said senior journalist Nusrat Javeed.

"Still, for a party that only really arrived on the political scene in a serious way two years ago, PTI's performance was remarkable, to say the least."

Mr Sharif declared victory in a jubilant speech to supporters. Today, television channels said results so far showed that the PML-N had captured 84 seats of the 272 National Assembly seats that were contested.

The PTI had secured 19 seats while the PPP, which led the government for the past five years, won 11.

Mr Sharif, a religious conservative, has said the army, which has ruled the country for more than half of its turbulent history, should stay out of politics. But he will have to work with Pakistan's generals, who set foreign and security policy and manage the nuclear-armed country's difficult relationship with the United States as Nato troops withdraw from neighbouring Afghanistan in 2014.

Mr Sharif also believes Pakistan should reconsider its support for the US war on Islamist militancy, which has earned the country billions of dollars in aid.

Despite pre-poll violence and attacks yesterday that killed at least 17 people, millions turned out to vote.

Mr Sharif's party may not have enough seats to rule on its own and may be forced into a coalition, which could make it difficult to push reforms needed to revive the economy.

He has said Pakistan should stand on its own two feet but may need to seek a another bailout from the International Monetary Fund to avoid a balance of payments crisis.

He has described Pakistan as a "mess". Cricketing hero Imran Khan in the end did not have the momentum needed to trip up Mr Sharif despite his popularity among urban youths, many of whom were voting for the first time in an election that saw a robust turnout of 60 per cent.

They had rallied behind Mr Khan's calls for an end to graft and a halt to US drone strikes against suspected militants on Pakistani soil, widely seen as a violation of sovereignty.

A string of bomb blasts marred election day, with one attack on a party office in the southern city of Karachi killing 11 people and wounding about 40.

Pakistan's Taliban, who are close to al-Qaeda, have killed more than 125 people in election-related violence since April. The group, which is fighting to topple the government, regards the poll as un-Islamic.

Despite Pakistan's history of coups, the army stayed out of politics during the five years of the last government and threw its support behind yesterday's election. However, some fear the military could step back in if there were a repeat of the incompetence and corruption that frustrated many Pakistanis during the last government.

Mr Sharif, who was toppled in a 1999 bloodless coup by former army chief Pervez Musharraf, may take steps to improve ties with

Pakistan's arch-enemy, India. Efforts to boost trade between the neighbours have stalled due to suspicion on both sides. If Mr Sharif is forced into a coalition, he may look to Islamist parties to cobble together a majority in parliament.

On top of the 272 contested seats, a further 70 - most reserved for women and members of non-Muslim minorities - are allocated to parties on the basis of their performance in the constituencies. To have a majority of the total of 342, the government would need 172 seats.

Pandemic payment may be needed for ‘much longer’ than a year, Dáil hears