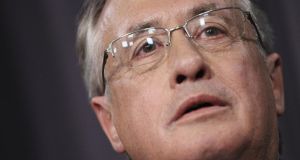 Kevin Rudd will today be sworn in as Australia’s prime minister for a second time after Julia Gillard lost an internal ballot for the leadership of the ruling Labor Party.

The development amounted to a dramatic reversal of fortune for Ms Gillard, who deposed Mr Rudd as party leader and prime minister almost exactly three years ago.

The two had been bitter rivals since then and yesterday matters came to a head when Ms Gillard called a snap ballot among Labor MPs in an attempt to end the party’s leadership war once and for all.

She said she was doing so on the basis that the loser would retire from politics . “Tonight is the night,” she said. Mr Rudd said he accepted the challenge on the basis proposed.

Ms Gillard then lost the ballot by 57 votes to 45, with several MPs thought to have switched their vote to Mr Rudd after minister for employment Bill Shorten announced he was doing so 20 minutes before last night’s Labor caucus meeting.

Mr Shorten was formerly a staunch defender of Ms Gillard, and played a key role in her deposing Mr Rudd.   “I have now come to the view that Labor stands the best chance to defend the legacy of this term of government and to continue improving the lives of millions of Australians if Kevin Rudd is our leader,” Mr Shorten said.

Mr Rudd said he had had to challenge Ms Gillard as under her leadership Labor was heading for a landslide loss to the Liberal-National coalition led by Tony Abbott in the forthcoming general election.

“I simply do not have it in my nature to stand idly by and allow an Abbott government to come to power in this country by default,” Mr Rudd  said.

Before the ballot he said he was responding to the public call for him to stand. “It’s your voices, the voices of the Australian people . . . that have had a huge effect on me more so than most of the voices I happen to hear around the corridors of this building,” he said.   The two most recent major polls showed Labor on 29 per cent and likely to lose almost half its seats in the federal election due in September. Before becoming prime minister again, Mr Rudd will have to demonstrate to Australia’s governor general Quentin Bryce that he can command a majority in the lower house, despite Labor being a minority government.

Independents
The fact that Ms Bryce’s daughter is married to Mr Shorten is likely to be used in some quarters to disparage Mr Rudd’s legitimacy as prime minister.

Two independents who help keep Labor in power yesterday both announced they would not stand in the coming election. They said Labor could not take their votes for granted in the event of a change in leadership.   However, another independent, who previously refused to back Labor, last night threw his support behind Mr Rudd.   Five senior ministers, including treasurer and deputy prime minister Wayne Swan, resigned their portfolios after Ms Gillard lost the ballot. Two of them, and Ms Gillard, will not contest the coming election.

In a stoical press conference, Ms Gillard said Labor can win the election if it unites.

“I know that it can be done, that it will best be done by putting the divisions of the past behind us and uniting as a political party.”

‘Negative politics’
Mr Rudd had earlier said:  “I recognise that Mr Abbott  is a man steeped in the power of negative politics and he is formidable at  negative  politics.”

The opposition began running a new anti-Rudd advertisement last night which featured previous negative statements made about him by some of his Labor colleagues.

Though Ms Gillard had set an election date of September 14th, Mr Rudd is under no obligation to stick to that date, and could leave an election as late as January 2014.