Europeans have not helped US enough, says Mike Pompeo after strike on Iranian general

Thousands of mourners gathered in Baghdad for the funeral of Iran's slain military commander Qassem Suleimani, Iraqi militia leader Abu Mahdi al-Muhandis and others killed in a US air strike in Iraq. Video: Reuters 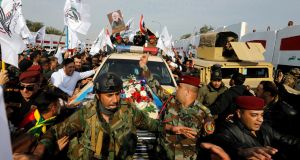 A coffin is seen inside a car during the funeral of the Iranian Major-General Qassem Suleimani. Photograph: Khalid al-Mousily/Reuters

With shouts of “Death to America”, tens of thousands of people marched in Iraq on Saturday to mourn Iranian military commander Qassem Suleimani and an Iraqi militia leader who were killed in a US air strike that has raised the spectre of wider conflict in the Middle East.

On Saturday evening, two loud blasts were heard in Baghdad, Reuters witnesses said. Police sources said a Katyusha rocket landed near the US embassy inside the city’s heavily fortified Green Zone. A further two Katyusha rockets fell inside Iraq’s Balad air base, 80 km north of Baghdad, which houses US forces. Rockets also fell in Baghdad’s Jadriya neighbourhood. According to security sources, there were no casualties.

“Several rockets targeting Celebration Square and the Jadriya area in Baghdad, and the Balad air base in Salahuddin province, with no loss of life. Further details to come,” the military said in a statement.

Iraq’s Kataib Hizbollah militia warned Iraqi security forces to stay away from US bases in Iraq, al-Mayadeen television said. “Security forces must stay clear of American bases by a distance not less than a thousand metres starting Sunday evening,” al-Mayadeen quoted the militia as saying.

The US Embassy in Baghdad urged American citizens to leave Iraq. Dozens of American employees of foreign oil companies left the southern Iraqi city of Basra on Friday.

“The safety of our personnel in Iraq is paramount. We continue to take all precautions necessary,” acting Nato spokesman Dylan White said in a statement.

Suleimani, commander of the Revolutionary Guards’ foreign legions, was killed in the US strike on his convoy at Baghdad airport on Friday. The attack took Washington and its allies, mainly Saudi Arabia and Israel, into new territory in its confrontation with Iran and its proxy militias across the region.

US secretary of state Mike Pompeo expressed disappointment with European reaction to the US killing of Suleimani, suggesting that the UK, France and Germany had not been sufficiently supportive.

“I spent the last day-and-a-half, two days, talking to partners in the region, sharing with them what we were doing, why we were doing it, seeking their assistance. They’ve all been fantastic,” Mr Pompeo told Fox TV. “And then talking to our partners in other places that haven’t been quite as good.

“Frankly, the Europeans haven’t been as helpful as I wish that they could be. The Brits, the French, the Germans all need to understand that what we did, what the Americans did, saved lives in Europe as well. Qassem Suleimani led, and his IRGC [Revolutionary Guard], led assassination campaigns in Europe. This was a good thing for the entire world, and we are urging everyone in the world to get behind what the United States is trying to do to get the Islamic Republic of Iran to simply behave like a normal nation.”

On Saturday evening, the UK urged all parties to show restraint, but said its closest ally was entitled to defend itself against an imminent threat.

Defence minister Ben Wallace said in a statement that he had spoken to his US counterpart Mark Esper, adding: "We urge all parties to engage to de-escalate the situation.

"Under international law the United States is entitled to defend itself against those posing an imminent threat to their citizens," he added.

Mr Wallace confirmed Royal Navy ships would again be used to escort British-flagged vessels through the Strait of Hormuz. In a statement, he said "The government will take all necessary steps to protect our ships and citizens at this time."

“The two presidents agreed to remain in close contact to avoid any further escalation in tensions and in order to act to ensure stability in Iraq and the broader region,” a statement from Mr Macron’s office said.

Mourners included many militiamen in uniform for whom Muhandis and Suleimani were heroes. They carried portraits of both men and plastered them on walls and armoured personnel carriers in the procession. Chants of “Death to America” and “No no Israel” rang out.

“It is necessary to take revenge on the murderers. The martyrs got the prize they wanted – the prize of martyrdom,” said one of the marchers, Ali al-Khatib.

US president Donald Trump said on Friday that Suleimani had been plotting imminent attacks on American diplomats and military personnel. Democratic critics said the Republican president’s action was reckless and risked more bloodshed in a dangerous region.

The US strike followed a sharp increase in US-Iranian hostilities in Iraq since last week when pro-Iranian militia attacked the US embassy in Baghdad after a deadly US air raid on the Kataib Hezbollah militia, founded by Muhandis.

Gholamali Abuhamzeh, a senior commander of the Revolutionary Guards, said Tehran would punish Americans “wherever they are in reach”, and raised the prospect of possible attacks on ships in the Gulf.

On Friday, Iranian Supreme Leader Ayatollah Ali Khamenei said Suleimani’s death would intensify Tehran’s resistance to the US and Israel.

Abuhamzeh, the Revolutionary Guards commander in Kerman province, mentioned a series of possible targets for reprisals including the Gulf waterway through which about a third of the world’s shipborne oil is exported to global markets.

“The Strait of Hormuz is a vital point for the West and a large number of American destroyers and warships cross there,” Abuhamzeh was quoted as saying on Friday evening by the semi-official news agency Tasnim.

Many Iraqis condemned the US attack, regarding Suleimani as a hero for his role in defeating Islamic State militants who seized large swathes of north and central Iraq in 2014.

Many Iraqis also voiced fear of militia reprisals against those involved in months of street protests against the Iranian-backed Baghdad government over alleged misrule and corruption.

They said Suleimani and Muhandis had backed the use of force against unarmed anti-government protesters last year and established militias that demonstrators blame for many of Iraq’s social and economic woes. – Reuters/Guardian