Protection of monument from environmental degradation a ‘hopeless cause’, court rules 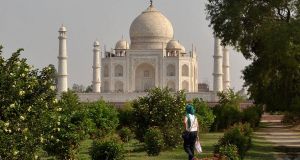 India’s supreme court castigated the authorities for not acting quickly enough to protect the Taj Mahal in Agra. Photograph: EPA/STR

India’s supreme court has declared that preservation of the Taj Mahal from environmental degradation is a “hopeless cause”.

Responding to a public-interest petition by an environmental activist concerned over the deteriorating state of one of the world’s seven wonders, the two-judge bench castigated the authorities for not acting quickly enough to protect the 17th-century white marble monument.

“Either we shut down the Taj or demolish it or you restore it,” the court said on Wednesday.

In their observations on the discolouration of the monument built by the Mughal emperor Shah Jahan as a mausoleum to his wife Mumtaz Mahal in Agra, 247km southeast of New Delhi, the judges derided France’s Eiffel Tower.

“Eighty million people [annually] visit the Eiffel Tower, which looks like a TV tower,” the judges told India’s federal government and the administration in Uttar Pradesh state, where the Taj is located.

“Our Taj is more beautiful, and if you had looked after it your country’s foreign exchange problem would have been solved [through additional visitors],” the court said.

Continuing “apathy” in preserving the Taj had resulted in incalculable revenue losses, the court indicated. It reprimanded the state government for failing to implement measures detailed in a recent parliamentary report to protect the monument

Indians are charged the equivalent of 50 cent to enter the Taj, whilst foreigners have to pay the equivalent of €12.41. The supreme court said it would hear the matter daily from July 31st, indicating the seriousness it attaches to the Taj’s preservation.

In May the same court directed the federal and provincial authorities to appoint international experts to rectify the “serious colour change” in the Taj’s once gleaming white marble, caused by pollution.

It stated that earlier the Taj was turning yellow, but over the past three decades had become brown and green due largely to particulate matter released by industrial units that had proliferated in the monument’s environs.

Smoke and toxic effluents from tens of thousands of household generators running on kerosene and diesel added to the contamination.

Additionally, clusters of tiny insects that bred in the garbage-choked Yamuna river, which runs beside the Taj, had also infested the monument, their corrosive excrement further staining its marble, the court said.

Periodically coating the Taj with a herbal “mud pack” to mitigate this damage had done little or nothing to repair its blemished marble, experts said.

In January the Archaeological Survey of India (ASI), which manages the Taj, capped the number of local visitors to it at 40,000 per day, largely for environmental reasons and also to prevent stampede-like situations that occur frequently across India wherever large crowds congregate.

However, no limit was imposed on foreign tourists visiting the Taj as they are a source of high revenue.

Another crowd management measure under consideration is limiting the time visitors stay inside the vast Taj complex to three hours. According to the ASI an average of 35,000 people daily visit the Taj, but this more than doubles at the weekend and on holidays, often topping some 75,000 people.