Protests escalate in India over gang-rape and murder of woman 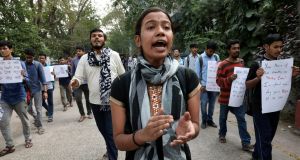 Students in Kolkata shout slogans during a protest against the rape and murder of a 27-year-old woman in Hyderabad. Photograph: Rupak De Chowdhuri/Reuters

Outrage has continued to grow in India over the gang-rape and murder of a 27-year-old woman, with protesters taking to the streets and politicians calling for the offenders to be “lynched”.

Several MPs spoke out in parliament on Monday against the killing last week of the veterinary doctor in Hyderabad. Four men allegedly deflated her scooter tyres to leave her stranded then approached her appearing to offer to help. It is alleged she was dragged to an abandoned area by the roadside where she was gang-raped, asphyxiated to death and her body set alight and dumped.

“This act has brought shame to the entire country, it has hurt everyone,” said the defence minister, Rajnath Singh, speaking out against what he called a “heinous crime”.

Jaya Bachchan, an MP and former Bollywood actor who has been a vocal proponent of women’s rights, was also among those who spoke out. “I know it sounds harsh, but these kind of people should be brought out in public and lynched,” she said in parliament.

Police have arrested four men on suspicion of carrying out the attack and they are in custody.

Ms Bachchan demanded to know how the Indian government planned to improve safety for women in India and protect them against sexual violence. Last week multiple rapes and murders were reported, including the gang-rape and murder of a lawyer in Jharkhand and the rape and murder of a six-year-old child in Rajasthan.

“The people want the government to give a proper and definite answer,” said Bachchan.

It was an anger reflected on the streets. Following on from protests over the weekend, hundreds of people again gathered in Delhi on Monday to demand a fast-tracked investigation in the Hyderabad case and more stringent laws protecting women in India.

The attack has been compared to the notorious gang-rape and murder of a student on a bus in Delhi in 2012, which prompted thousands of women to take to the streets in protest. The outrage spurred quick action on legislation doubling prison terms for rapists to 20 years and criminalising voyeurism, stalking and the trafficking of women.

But sexual violence against women remains rife in India. Police in the country registered 33,658 cases of rape in 2017, according to the most recent available official records – an average of 92 a day. The real figure is believed to be far higher as many women in India do not go to the police out of fear. The data also reveals that more than 90 per cent of crimes against women are pending in city courts.

India is the most dangerous place in the world to be a woman because of the high risk of sexual violence, according to a 2018 survey by the Thomson Reuters Foundation. – Guardian