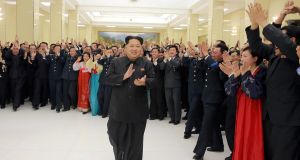 North Korean leader Kim Jong-un being welcomed during a party in Pyongyang for scientists who contributed to the launch of the earth observation satellite Kwangmyong. Photograph: AFP/Korean Central News Agency via KNS

Lee Chul-woo, a ruling party politician, said the service was collecting the relevant information on possible attacks – perhaps using poison or kidnapping South Koreans, or cyberwarfare – by the North’s Reconnaissance General Bureau. He was speaking at a government meeting urgently called to discuss the issue.

“It could target public facilities and key infrastructure, including subways, shopping malls and power stations.”

“We ask again that parliament swiftly pass the anti-terrorism law so that we have the legal and systematic foundation to protect the lives and property of the people,” Mr Kim said, referring to planned legislation aimed at boosting South Korea’s anti-terror capabilities.

In 2010, North Korea shelled an island killing four South Koreans and in 1987, the North blew up a South Korean passenger plane killing all 115 people on board.

South Korea has vowed to take significant measures against the North in response to Pyongyang’s latest nuclear test and a long-range rocket launch, which Seoul and Washington believe was a banned test of ballistic missile technology.

Seoul has started talks with Washington about deploying the US Terminal High Altitude Area Defense, or THAAD, missile defence system in South Korea, which has angered both North Korea and China, the North’s main ally.

The foreign ministry had told lawmakers that China also shared the need to slap stronger and more effective sanctions on North Korea as Seoul has appealed for co-operation, Mr Lee said.

South Korean president Park Geun-hye has pledged to “prioritise the stick over the carrot in bringing Pyongyang into line”.

Next month, Seoul and Washington plan to conduct the largest joint military drills ever, starting in March and lasting about two months, as part of efforts to counter any North Korean provocation. About 15,000 US troops will take part, which is double what Washington usually sends.

On Wednesday, four US F-22 stealth fighters flew across South Korea to an air base near Seoul.

The Seoul government said that the North seemed to time its recent provocations to coincide with North Korea’s congress of the ruling Workers’ Party of Korea, which is expected in May and where leader Kim Jong-un is likely to outline policies and a major reshuffle, the Yonhap news agency reported.

The UN Security Council is working on a new resolution to impose tougher sanctions on North Korea, but China and Russia, two of the five veto-wielding permanent council members, are said to be less enthusiastic about sanctions.