Pyongyang hails ‘significant achievement’ before meeting with US officials on Saturday 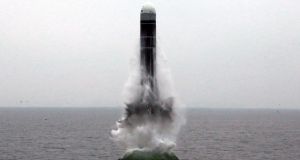 ‘New-type SLBM Pukguksong-3’ in waters off Wonsan Bay of the East Sea of Korea. Photograph: KCNA via KNS/AFP

North Korea has confirmed it tested a new submarine-launched ballistic missile, calling it a “significant achievement” in its efforts to contain external threats and bolster its military power.

The test-firing on Wednesday was North Korea’s first of a submarine-launched missile in three years and came ahead of a resumption of nuclear diplomacy with the United States this weekend.

Some experts say North Korea wants to show to the US what would happen if diplomacy fails again.

The Korean Central News Agency said the test of the Pukguksong-3 missile in the waters off its east coast was successful and “ushered in a new phase in containing the outside forces’ threat to [North Korea] and further bolstering its military muscle for self-defence”.

It did not say which outside forces threaten its security, but North Korea has previously said it was forced to develop nuclear-armed missiles to cope with US military threats.

North Korean and US officials are due to meet on Saturday to restart diplomacy on how to end the North Korean nuclear crisis.

That diplomacy largely remains at a stalemate after the February breakdown of a second summit between US president Donald Trump and North Korean leader Kim Jong-un in Vietnam.

North Korea has recently warned its dealings with the United States may end if it fails to come up with new proposals to salvage the nuclear diplomacy by December.

KCNA said the missile was launched in a vertical mode and that its test had no adverse impact on the security of neighbouring countries.

Pukguksong, or Polaris, is a solid-fuel missile in the North’s weapons arsenal.

The country first test-launched a Pukguksong-1 missile from an underwater platform in 2016, and Mr Kim said at the time his military had gained “perfect nuclear-attack capability”.

A year later, the North test-launched a Pukguksong-2, a land-based variant of the missile.

North Korea having an ability to fire a missile from a submarine is a threat to the United States and its allies because such launches are harder to detect early enough to respond.

After Wednesday’s launch, the US State Department called on North Korea “to refrain from provocations, abide by their obligations under UN Security Council resolutions, and remain engaged in substantive and sustained negotiations to do their part to ensure peace and stability on the Korean Peninsula and achieve denuclearisation”.

Japan lodged an immediate protest, saying the missile landed inside its exclusive economic zone for the first time since November 2017. – AP