Nawaz Sharif and daughter arrested on arrival in Pakistan 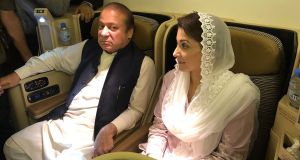 Former prime minister Nawaz Sharif and his daughter Maryam Nawaz await arrest on an aircraft after their arrival in Lahore. Photograph: PML-N/Getty Images

Pakistan’s former prime minister Nawaz Sharif was arrested in Lahore airport on Friday as he returned to face a 10-year prison sentence which he claims is part of a wide-ranging, military-backed conspiracy to deny his party a second term in an election due on July 25th.

Military police boarded Sharif’s flight as it landed from a stop in Abu Dhabi after taking off in London. Paramilitary Rangers linked arms and battled Mr Sharif’s supporters to escort the 68-year-old off the aircraft, into a waiting car and then across the 200 yards to another small aircraft.

The Rangers also arrested Maryam, his daughter, who on July 6th was sentenced with her father to seven years in the trial over how the family came to own four luxury flats in London’s Park Lane, a story resurfaced by the 2016 leak of the Panama Papers.

“Who wants to go to jail?” Mr Sharif told the Guardian from the Etihad airlines flight, on which supporters yelled pro-Sharif slogans while in the air. “But it is a very small price to pay for my mission, which is to establish the sanctity of the vote in Pakistan.”

The arrests ignited an otherwise lacklustre election campaign beset by allegations the powerful military was “engineering” the vote to promote the main opposition party, Pakistan Tehreek-e-Insaf (PTI), led by the former cricketer Imran Khan. The military has denied the allegations.

The National Accountability Bureau (NAB), Pakistan’s anti-graft court, ruled earlier this month that Mr Sharif and his family laundered money in the 1990s to pay for four luxury apartments in Park Lane, central London, drawing on allegations that resurfaced in the Panama Papers leak.

Ahead of Mr Sharif’s return his brother Shahbaz, the former chief minister of Punjab, led tens of thousands of supporters in a welcome rally: the caravan had to negotiate a city turned into a warren of roadblocks.

“What credibility will the election have if the government is taking such action against our people?” asked Mr Sharif.

“Somebody is forcing the caretaker government to take these actions,” he said, hinting at the role of the so-called “establishment”, whose influence Mr Sharif attempted to limit until he was ousted in a controversial supreme court ruling last July.

A battle with the deep state, which began when the military ousted Mr Sharif in a bloodless coup in 1999, reached its peak this week. Mr Sharif openly named a general at Pakistan’s intelligence service, ISI, as behind the attempts to push PML-N politicians to join the PTI, splintering the taboo by which civil leaders only refer to the armed forces in vague code; “angels” in the case of intelligence agents.

Mr Sharif planned to appeal against his conviction on landing but analysts doubt he would receive bail before the election. The leadership hopes that instead his sentence of “rigorous imprisonment” – which could include physical labour – will play to the party’s favour in the elections, turning him into a martyr for civilian supremacy.

Sympathy for Mr Sharif has been piqued by the illness of his wife, Kulsoom, who is in a coma in a London hospital after treatment for throat cancer. In a parting photograph shared widely on social media, Sharif leans over her sickbed and touches her brow with a gloved hand, while Maryam wipes her eyes.

Recent polls show that Khan’s party, the PTI, is gaining on the PML-N. The latest puts it marginally in front. On Friday, European election monitors were granted permission to deploy across the country. The Election Commission of Pakistan (ECP), the state’s election management body, was criticised for granting too much of a role to the military on polling day in an editorial in the liberal newspaper Dawn.

“More stringent measures need to be taken by the ECP,” said Mr Sharif, before welcoming his white-veiled daughter into the seat next to him and waiting for his arrest.

It came as an election rally in the southwestern province of Balochistan was hit by a suicide bomber killing at least 128 people. The blast – which was claimed by Islamic State – ripped through the crowd in the town of Mastung near the Balochistan provincial capital Quetta. The explosion killed Siraj Raisani, who was running for a provincial seat with the newly formed Balochistan Awami party, the provincial home minister, Agha Umar Bungalzai, told AFP. – Guardian service