Najib recasts himself as man of the people as trial begins 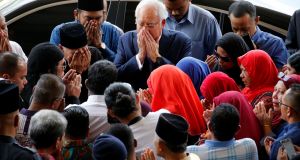 Ahead of what is being touted as Malaysia’s trial of the century – the start of hearings against former prime minister Najib Razak over the country’s sprawling 1MDB corruption scandal – the politician launched a social media offensive.

Once known for his tailored suits and impeccable English, his Instagram feed shows a casually dressed Najib meeting people in markets, holding babies, going grocery shopping and taking Kuala Lumpur’s underground. In one picture, he appears wearing a hoody and sitting astride one of Malaysia’s ubiquitous scooters.

The online campaign to change Najib’s image from profligate elite to man of the people, which has attracted tens of thousands of likes, comes as the politician is pleading not guilty to seven charges of criminal breach of trust, money laundering and abuse of power.

The charges are linked to SRC International, a former subsidiary of 1MDB, the state investment fund launched by Najib and from which the US Department of Justice alleges $4.5 billion (€4 billion)has gone missing.

The trial in the Kuala Lumpur high court marks an important moment for Malaysia, whose voters delivered a surprise election victory for Mahathir Mohamad, the nonagenarian former prime minister, in May last year after a campaign that centred on the 1MDB corruption allegations. On trial will not only be Najib but also the country’s political and legal institutions, analysts argue.

“All eyes are on the judiciary to see if due process will apply,” said Edmund Terence Gomez, professor of political economy at the University of Malaya, adding that under the old regime, which concentrated power into the hands of the prime minister, “there was no way this could have happened”.

On coming to power, Mahathir lost no time unleashing a fierce probe against Najib, leading to the seizure of $275 million in luxury goods from property linked to the former leader, including $30 million in cash and 423 mostly designer watches. This month’s case is the first of four trials Najib is set for this year. He faces an additional 38 charges linked to 1MDB and state entities.

The scandal involves jurisdictions from Switzerland to Singapore and the US, as well as top Wall Street banks, with the US Department of Justice indicting two former Goldman Sachs bankers for allegedly helping to divert funds from 1MDB.

But the trial has already faced delays. Najib’s lawyers succeeded in having it deferred for two months in February on a technicality. They filed another action that will be heard in the federal court on Thursday that could lead to further delays in the high court hearings.

Analysts argue that the delays in the trial could be seen as a measure of the independence of Malaysia’s legal system, given the Mahathir government’s stated determination to try Najib.

Muhammad Shafee Abdullah, Najib’s lead counsel, told reporters in February that the postponement was based on allegations from his team that the prosecution infringed due process relating to the transfer of the case to the high court.

But whatever the technical reasons for the delays, some analysts fear that if the trial drags on for too long, it could lose momentum. Malaysia’s next prime minister might not back the investigations into 1MDB with the same vehemence as Mahathir, who has pledged to step down in 2020.

“If Mahathir is no longer prime minister, there might not be such a strong impetus simply because Mahathir has been the main person driving this investigation, the most aggressive one,” said Harrison Cheng, associate director at consultancy Control Risks. “I am not sure if anyone who succeeds him would be as committed.”

This will depend particularly on whom Mahathir (93) anoints as his successor. He announced when he took office that he would cede the premiership to Anwar Ibrahim, his former protégé and the leader of the biggest party in the ruling coalition.

But Mohamed Azmin Ali, Malaysia’s economic affairs minister who is leading an anti-Anwar faction within his own party, could challenge this succession, analysts say. Azmin has close ties to Hishammuddin Hussein, a senior member of opposition party Umno and Najib’s cousin, they say.

If Mahathir were to pick Azmin rather than Anwar, as his successor, “there might be complications” given the minister’s ties to leaders of Umno, Najib’s party. “Those links ... might make the path to prosecution a lot less straightforward,” said Cheng of Control Risks.

Still, Charles Santiago, a Malaysian politician in the ruling coalition, said there would be a lot of public support for the trial no matter who became prime minister. “There is a lot of vigilance on the part of the people ,,, they will press whoever takes over,” he said. – Copyright The Financial Times Limited 2019