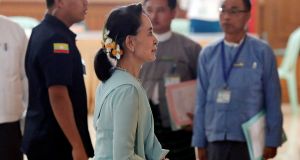 Aung San Suu Kyi: “While building peace and stability is the most important requirement for our country, we need the strength of unity.” Photograph: Reuters

Ms Suu Kyi was speaking on the second anniversary since since her party swept to power in a historic vote. In a televised speech, she made only a passing reference to the crisis in Rakhine state, where her government faces mounting international condemnation for a military operation against Rohingya Muslims that has sent nearly 700,000 members of the minority community fleeing to Bangladesh.

The Nobel Peace Prize laureate has also struggled to match the sky-high expectations that swept her National League for Democracy to power in 2016, and is struggling to rebut criticism over slower economic growth and continued fighting with ethnic armed groups.

“The world’s focus in on Rakhine right now, but we also need to peacefully develop the country. We are facing challenges from inside and outside of the country, as we are struggling to develop politics, society and economy,” she said.

She also urged people to “respect the intentions and vision of the international community” but did not elaborate on this statement.

The civilian government led by Ms Suu Kyi has no control over the military, which launched the crackdown in Rakhine in response to insurgent attacks on security forces in August.

The United States and United Nations have described the operation as ethnic cleansing of the Rohingya, which Myanmar denies.

Ms Suu Kyi also talked about her number one priority – to end decades of fighting between ethnic rebels and the military, which has kept Myanmar in a state of near-perpetual civil war since independence in 1948.

“While building peace and stability is the most important requirement for our country, we need the strength of unity,” she said.

Two ethnic armed groups in Myanmar signed a ceasefire with the government in February as Ms Suu Kyi sought to revive the stuttering peace process. The Buddhist-majority country has experienced the worst fighting with rebels in years since she took office.

Myanmar on Friday swore in a close ally of Ms Suu Kyi as the country’s new president after the outgoing president retired. Analysts said the move was unlikely to affect a delicate balance of power between Suu Kyi and the military. – Reuters