Kim Jong-un orders nuclear weapons to be kept ‘on standby’ 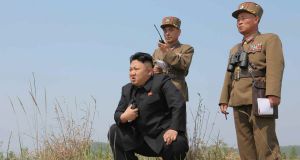 Kim Jong-un has ordered that nuclear warheads be readied for firing ‘at any moment’ in the face of sanctions on North Korea. Photograph: EPA/Rodong Sinmun

North Korean leader Kim Jong-un ordered his country to be ready to use its nuclear weapons at any time, as the country’s only significant ally China urged the North to abandon its “self-destructive course”.

Tensions in the region are running high after North Korea fired a volley of short-range missiles into the East Sea in a show of defiance after the UN Security Council’s adoption of its toughest ever sanctions against Pyongyang this week over its fourth nuclear test and rocket launch.

Mr Kim urged the North Korean military to be in “pre-emptive attack” mode in the face of growing threats from its enemies, the country’s official KCNA news agency reported.

North Korea must “bolster its nuclear force both in quality and quantity”, Mr Kim said, stressing “the need to get the nuclear warheads deployed for national defence always on standby so as to be fired any moment.”

He was speaking as he supervised military exercises involving newly developed rocket launchers. More such threats can be expected ahead of South Korea’s large-scale joint military exercises with the United States slated to kick off on Monday.

North Korea is known for sabre-rattling rhetoric after the international community increases sanctions, and it has threatened pre-emptive strikes before.

Military experts doubt it has yet developed the capability to fire a long-range missile with a miniaturised warhead to deliver a nuclear weapon over long distances, although Seoul is just 50 kilometres from the demilitarised zone (DMZ) that marks the buffer between North and South since the end of the Korean War in 1953.

China, which fought alongside North Korea in the Korean War and whose aid is the only thing keeping the economy there going, is in a tough situation.

One the one hand, it is annoyed that Seoul was due to start talks later on Friday with Washington about deploying the US Terminal High Altitude Area Defence, or THAAD, missile defence system in South Korea, as China believes it could also be used against its weapons systems.

But it has also been wrong-footed by Pyongyang on its nuclear plans and has backed the sanctions, however reluctantly.

An editorial in the China Daily said: “Judging from its past pattern of reactions, the vengeful Pyongyang may get even more aggressive in its nuclear-missile pursuits and threats to use force.”

Calling this a “self-destructive course”, the paper, whose views are almost certainly in line with the Communist leadership in Beijing, urged Pyongyang to avoid harmful tit-for-tat actions and instead make a new start.

The sanctions were aimed at halting the nuclear programme, not at bringing about the collapse of the Democratic People’s Republic of Korea (DPRK), as it is officially known.

The North’s diplomatic isolation was of its own creation, it said.

“Pyongyang does not have many options under the new UN resolution. But it does have a very easy way out: Let go of its nuclear-missile programme. Sit down and talk,” it said, adding that the international community would not give up until denuclearisation is achieved.

“The final judgment day for the devil in the Cheong Wa Dae (presidential office) is approaching,” the North’s main newspaper, the Rodong Sinmun, said. “The heavenly punishment for her sin will soon lead to her tragic end.”

The paper has previously called her a “traitor” and a “dotard”, the Yonhap news agency reported.