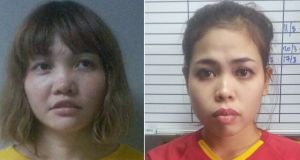 Doan Thi Huong (left) and Siti Aisyah after being arrested in connection with the death of Kim Jong-nam. Photograph: EPA/Royal Malaysia Police Handout

Malaysia will cancel visa-free entry for North Koreans coming to the country from Monday, as diplomatic ties between the two nations worsened over the poisoning of Kim Jong-un’s half-brother two weeks ago.

Kim Jong-nam, the estranged half brother of the North Korean leader, was killed at Kuala Lumpur airport with the VX toxic nerve agent.

Malaysia has released and deported Ri Jong-chol, the North Korean being held in connection with the death.

“He will not be charged here as there is insufficient evidence against him,” attorney-general Mohamed Apandi Ali told the Malaysia Star. Mr Ri had earlier been described as an expert in chemistry.

North Korea has blamed Malaysia for the killing, trying to convince authorities not to perform an autopsy on Kim Jong-nam’s body and seeking the release of three suspects detained in connection with the killing.

“I hope the decision of the home ministry will be implemented by the immigration department for the sake of national security,” Malaysian deputy prime minister Ahmad Zahid Hamidi said, quoted by the Bernama news agency.

The two countries have been friendly since the 1970s, when former prime minister Mahatir Mohamad cultivated close ties with the Stalinist state partially as a way of antagonising the US.

Malaysia is one of the very small number of countries that North Koreans can visit without a visa, while Malaysians are also granted visa-free entry to North Korea.The two women accused of administering the toxic agent that killed Mr Kim - Vietnamese Doan Thi Huong and Indonesian Siti Aisyah - were charged with murder at the Sepang magistrate’s court on Wednesday.

Both women say they were duped into thinking they were taking part in a prank.

“I understand but I am not guilty,” Ms Huong told the court in English after the murder charge was read out.

Four North Koreans, including a diplomat at the embassy, are still being sought over the allegedly orchestrated attack.

North Korea has not yet acknowledged the deceased as Kim Jong-un’s half-brother, saying only it involved a North Korean citizen called Kim Chol, and has also denied its involvement in the death.

The official KCNA agency has claimed the murder was staged by Seoul and Washington to instigate international anger against the Democratic People’s Republic of Korea (DPRK), using its official name, and start a nuclear war against the communist state.

“The US and its vassal forces should not run amok, clearly understanding the strategic position of the DPRK as a nuclear power,” it said.

KCNA has also condemned the latest round of joint military exercises involving South Korean and US, an annual event that always angers Pyongyang.

China is angry about the deployment of THAAD on its borders, as it suspects it will be used against its own weaponry in the event of conflict. Beijing has stepped up calls for Seoul not to deploy the system.

The focus of Chinese anger is the Lotte conglomerate, which has wide-ranging business interests in China. A unit of Lotte sold some land to the government to be used as a site for the THAAD system.