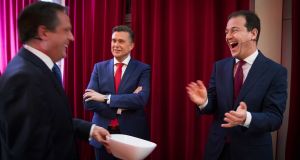 Dutch political party leaders Alexander Pechtold of D66, Emile Roemer of the Socialist Party and Lodewijk Asscher of Labour during a break in a television debate on February 26th. Voters go to the polls on March 15th. Photograph: Bart Maat/ EPA

A fortnight from the Dutch general election, two new polls are suggesting a fall-off in support for far-right leader Geert Wilders and his Freedom Party – one putting them a single seat ahead of prime minister Mark Rutte’s Liberals and the other a single seat behind.

At the start of February, Mr Wilders was polling as high as 35 seats in the 150-seat parliament, with Mr Rutte consistently in the low 20s. But a poll of polls published on Wednesday showed that lead diminishing – giving Mr Rutte 25 seats, a minuscule lead for the first time, and Mr Wilders just 24.

The same poll gives the Christian Democrats 18 seats, with D66 and GreenLeft both on 17, and the Socialists and Labour on 13. The failure of Labour to improve its fortunes under new leader Lodewijk Asscher already suggests its influence in forming a new coalition after March 15th could pass to D66.

If the outcome were to be in that general vicinity, it would mean that Mr Rutte would probably be able to form a five-party coalition, perhaps with the Christian Democrats, D66, Labour and GreenLeft, which would give him a comfortable majority at around 90 seats.

Similarly, if Mr Wilders were to win the popular vote by only a seat or two and then find himself unable to form a coalition because the other parties refused to work him, it is possible that some version of the same formula could still produce the Netherlands’ new government.

The second poll, from Kantar Public, confirms just how closely fought this election is likely to be.

In terms of suitability to become prime minister, it also shows an increase in Mr Rutte’s rating from 22 percent a week ago to 26 percent. D66 leader, Alexander Pechtold, comes in an impressive second with 14 percent. However, just 11 percent say they’d choose Mr Wilders as premier.

It’s unclear whether Mr Wilders’ polling has been affected by his decision last week to cancel all public engagements because a police officer on the wider team that provides his 24-hour protection is being investigated for allegedly leaking classified information.

Mr Rutte says a review has shown Mr Wilders’ security has not been compromised by the alleged leaks. However, it’s understood that his usual security detail is to be joined immediately by members of an elite military police unit specially trained in close-quarters protection.