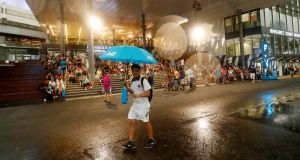 Up to 50mm of rain has fallen across parts of New South Wales and Victoria, dampening bushfires even as dozens more continue to burn.

Fire-hit regions of NSW’s Snowy Valley and south coast, and Victoria’s East Gippsland and north-east, received as much as 15mm of desperately needed rain on Wednesday and Thursday, while severe thunderstorms caused flooding in Melbourne.

However, more than 80 fires in NSW and 18 in Victoria continued to burn on Thursday, and lightning started two new fires in Victoria’s Great Otway national park, on the state’s south coast.

The NSW Rural Fire Service and Victorian Country Fire Authority said the rain they had received was not enough to put out existing fires.

A spokesman for the CFA said they had seen rain activity but “unfortunately it had minimal impact in suppressing the fire activity across east and north-east Victoria”.

“Although this rain won’t extinguish all fires, it will certainly go a long way towards containment,” the RFS said.

Australia’s unprecedented bushfire season has so far burnt through more than 10m hectares of land, killed 28 people and destroyed thousands of homes nationwide.

More rain is forecast for Thursday and Friday, with a total of 10mm in Albury, near the giant cross-border fire burning up into the NSW Snowy Valley, and 10mm in Omeo in East Gippsland on Thursday.

Weather in extremes, heavy smoke on Tuesday, 37 degrees on Wednesday morning and now heavy rain in Melbourne during #AusOpen pic.twitter.com/rRtinwozMz

Up to 15mm was forecast at Perisher Valley in the Snowy Valley and 10-15mm for the NSW south coast on Thursday.

As of Thursday, it was still burning across state lines, from Corryong in Victoria’s northern country into the NSW Snowy Valley. The huge fire is the result of multiple fires merging last week during hot, dry and windy weather.

Across 24 hours, 15mm fell at Buchan and 1.8mm at Orbost in East Gippsland, where fires forced the evacuation of thousands in December and January.

Only 2mm fell at Adaminaby in NSW, near the Adaminaby Complex fire, which is part of the same cross-border fire.

But 10mm fell across Ulladulla, on the NSW south coast near the Currowan fire.

And 48mm fell at Faulconbridge, just south of the Gospers Mountain megafire, which at 512,626 hectares is larger than Long Island and Manhattan combined, and more than three times the size of Greater London.

The town of Bilpin, which was hit by the Gospers Mountain fire, received 11m.

In Melbourne, a day of heavy smoke, hazardous air quality and health warnings was suddenly replaced on Wednesday afternoon by severe thunderstorms, and the possibility of giant hail.

In the suburb of St Albans, 54mm of rain fell in 30 minutes, and flash flooding was reported across the city and the south of Victoria.

The rain brought joy to firefighters, farmers and residents across the states, regardless of the amount.

But on Tuesday, the Bureau of Meteorology had warned that sudden heavy rain could be “a double-edged sword” that could cause flooding and landslides in fire-ravaged areas.

“Burnt-out areas of NSW and Victoria are now vulnerable to landslips and trees coming down,” the bureau meteorologist Sarah Scully said. – Guardian