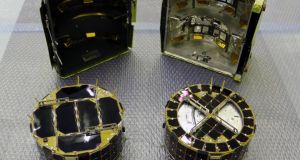 Japan’s small rovers MINERVA-II1, Rover-1A and Rover-1B, which became the first robots to land on a moving asteroid. Photograph: EPA

Two robots from Japan’s space agency have landed on a moving asteroid and begun a survey as part of a mission aimed at shedding light on the origins of the solar system.

The rover mission marks the world’s first moving, robotic observation of an asteroid’s surface, according to the Japan Aerospace Exploration Agency (JAXA).

The agency said the round, biscuit tin-shaped robots had successfully landed on the Ryugu asteroid a day after they were released from the Hayabusa2 probe.

“Each of the rovers is operating normally and has started surveying Ryugu’s surface,” JAXA said in a statement on Saturday.

The robots will take advantage of the asteroid’s low gravity, jumping around on the surface – soaring as high as 15 metres (49ft) and staying in the air for as long as 15 minutes – to survey the asteroid’s physical features.

“I am so proud that we have established a new method of space exploration for small celestial bodies,” said JAXA’s project manager, Yuichi Tsuda.

The agency tried but failed to land a rover on another asteroid in a similar mission in 2005.

In October, the Hayabusa2 probe will deploy an “impactor” that will explode above the asteroid, shooting a 2kg copper missile to blast a small crater into the surface.

From this crater, the probe will collect “fresh” materials unexposed to millennia of wind and radiation, hoping for answers to some fundamental questions about life and the universe, including whether elements from space helped give rise to life on Earth.

Hayabusa2, about the size of a large fridge and equipped with solar panels, is the successor to JAXA’s first asteroid explorer, Hayabusa – Japanese for falcon.

That probe returned from a smaller, potato-shaped, asteroid in 2010 with dust samples despite various setbacks during its epic seven-year odyssey and was hailed as a scientific triumph.

The Hayabusa2 mission was launched in December 2014 and will return to Earth with its samples in 2020.