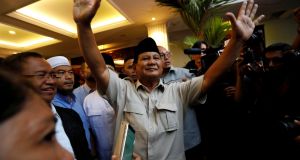 Indonesian presidential candidate Prabowo Subianto waves to the media after declaring himself the winner in Jakarta on Thursday. Photograph: Willy Kurniawan/Reuters

Indonesian authorities said they will not tolerate any unrest following Wednesday’s elections as opposition candidate Prabowo Subianto challenged unofficial results that point to a victory for the incumbent President Joko Widodo.

Tito Karnavian, national police chief, on Thursday warned against rallies even as Mr Prabowo’s supporters planned to march in celebration of “victory” after midday Friday prayers.

“I appeal to anyone not to mobilise, whether to mobilise people to celebrate victory for example, [or] to mobilise due to dissatisfaction,” Mr Tito told reporters, adding that the police would take “firm action”.

Wiranto, Indonesia’s security minister, said it was “forbidden” for supporters to engage in “provocative actions that would obviously disrupt public security and order” until the electoral commission announced official results in May. “Do not do anarchic acts that violate laws and regulations,” he added.

The official count of the world’s largest one-day exercise in democracy is not due until next month.

Mr Widodo is set to win the election with an advantage of about 10 percentage points, according to Wednesday’s “quick counts” – which are based on samples of votes from polling stations across Indonesia compiled by mainstream pollsters.

Yet Mr Prabowo has challenged Mr Widodo’s likely win. On Wednesday night, he said his camp’s calculations based on final tallies from about 40 per cent of polling stations nationwide showed he had 62 per cent of the vote. “This is a victory to the entire people of Indonesia. I will be the president to all Indonesians,” he said in a speech.

His statement echoed elections in 2014, when the opposition claimed victory before Mr Widodo was officially declared president.

Mr Prabowo, a former general dismissed by the army amid allegations of human rights violations against activists, on Wednesday urged his supporters to keep calm and “not to be provoked. We will never commit unlawful tactics because we have won.”

But he also called for supporters to protect ballot boxes and said he was “concerned” by alleged electoral irregularities.

In a speech in Jakarta on Wednesday afternoon, Mr Widodo said that “from the indications of the exit poll and also the quick counts, we can see it all”, but he stopped short of claiming victory. Unofficial quick counts have proved correct in previous elections in Indonesia.

Muchsin Alatas, leader of the hardline Islamic Defenders Front Jakarta branch, said that its members would join a peaceful march organised by Islamist movement Alumni 212 to celebrate what they deem is an electoral win for Mr Prabowo. The march is set to take place after Friday prayers at Jakarta’s Istiqlal mosque.

Mr Muchsin said it was “a democratic right of the people” to celebrate a victory. He added that lawmakers had already been informed about the planned event on Friday and that it was the police force’s responsibility to ensure the march ran smoothly. – Copyright The Financial Times Limited 2019

9:31 US cities under curfew as protests over Floyd killing rage on

1 Luke ‘Ming’ Flanagan bares his bottom half to European Parliament
2 Miriam Lord: Not a bare ankle, hairy knee or a Ming the Trouserless to be seen at Covid committee
3 Over 200 contracted Covid-19 while in hospital for other conditions
4 Trump turns to bible for photo op as DC burns around him
5 Programme for government must include 'fiscal responsibility' – Varadkar
Real news has value SUBSCRIBE