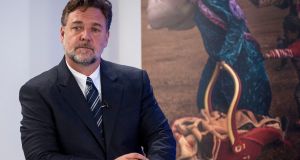 Russell Crowe at the Global Slavery Index launch at the Shard in London. Millions were “trapped in a cycle of despair and degradation with neither choice nor hope”, the actor said. Photograph: Lauren Hurley/PA

The third Global Slavery Index, by Australia-based human rights group Walk Free Foundation, said that of 167 countries polled, India ranked fourth, after North Korea, Uzbekistan and Cambodia, in terms of slavery as a percentage of its population.

According to the report a total of 46 million people were living globally as slaves, nearly half of whom were in India, comprising 1.4 per cent of its overall population of 1.3 billion.

Of the 14,000 respondents surveyed in India by polling company Gallup – of a total of 42,000 surveyed globally in 25 countries – a large number said they were forced to work in tortuous conditions to repay loans taken by themselves or by another family member.

Girls and women described being forced or duped into prostitution by traffickers and brothel owners, and many of them reported being repeatedly gang raped.

Young domestic workers spoke of long working hours, little or no wages and frequent physical and sexual abuse. Street beggars, often deliberately maimed, said criminal syndicates dragooned them into begging in the searing hot sun in chaotic traffic in cities across the country.

The preference for sons in India had resulted in the widespread, but proscribed, practice of aborting female foetuses, resulting in drastic reductions in the numbers of women number in large parts of India, the report found. This, in turn, had fuelled the trafficking of girls and brides, many of whom were then used as unpaid labourers by their spouses and their families.

In insurgency-ridden regions such as the northern Kashmir province, Assam in the northeast and Jharkhand and Chhattisgarh in central India, children were forcibly recruited by militant groups as informers or fighters, the report also said.

However, the index, which also rates governmental response to tackling slavery, based on support for victims, the strength of the criminal justice system and accountability, said India had improved in this regard in recent years.

It upgraded India’s rating, praising the introduction of a new anti-trafficking law and an online platform to track missing children.

Publication of the index coincided with India’s federal government announcing a draft bill envisaging stringent scrutiny of those accused of forcing minors into bonded and child labour and prostitution.

India abolished bonded labour in 1976, but gangs continue to lure tens of thousands of poor people from rural areas into working in mines, factories, farms and brick kilns in harsh and inhuman conditions.

Crowe, who played a Roman general turned slave in the 2000 film Gladiator, said nothing in cinema compared with the people’s lives reflected in the index. He said millions were “trapped in a cycle of despair and degradation with neither choice nor hope”.