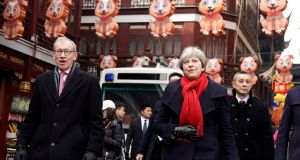 China’s Global Times has praised UK prime minister Theresa May for her pragmatism in refusing to comment publicly on China’s human rights record and the erosion of autonomy in Hong Kong during her three-day visit.

The newspaper, which is not the official voice of the ruling Communist Party but does give an insight into the views of more nationalist elements in China, said that she had sought to expand “pragmatic collaboration” to boost trade.

“However, some western media outlets keep pestering May to criticise Beijing in an attempt to showcase that the UK has withstood pressure from China and the West has consolidated its commanding position over the country in politics,” the paper said in an editorial in its English-language edition.

Trade dominated the headlines during Ms May’s three-day visit, which ended in Shanghai on Friday, with £9 billion (€10.25 billion) in trade deals, but there was no comment – in public anyway – on China’s human rights record or an open letter from Hong Kong democracy activist Joshua Wong calling on Ms May to “stand up for Hong Kong’s rights”.

Nor was there public reference to concerns about China’s “Belt and Road” infrastructure initiative.

Ms May was given broad assurances by President Xi Jinping that Brexit would not affect a “golden era” of Sino-British relations and what has been seen as a first step towards a free trade agreement post-Brexit.

The Global Times said that Ms May, like French president Emmanuel Macron during his visit in January, had not denounced China.

“Europeans must overcome prejudices and negative sentiments toward China,” the paper said.

“Radical voices are often heard in European public opinion on China-related issues, but they do not represent Sino-European relations and will gradually die down in the face of realistic needs,” the paper said.

Ms May was warmly received during the trip, with references in local media to her affectionate nickname “Auntie May” and comments about the handsomeness of her husband Philip.

However, her visit was overshadowed by political bickering at home over Brexit and threats to her leadership from within the Tory ranks.

She stood firm on her leadership, saying she was “no quitter” and on Friday gave a robust response to suggestions from her colleagues, such as chancellor Philip Hammond, that Brexit would involve only modest changes to economic relations with the EU.

“We will be leaving the single market, leaving the customs union. What we are going to then negotiate will be a free trade agreement with the European Union, ” Ms May said in an interview with Sky News in Shanghai, on the last day of her trip.

“It means we can get on with the job of enhancing trade round the world – important for prosperity and jobs,” she said.