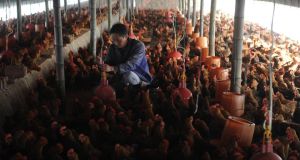 A chicken farm in Changfeng county, Anhui province. Poultry is off the menu in many restaurants in China. Photograph: Reuters

Chinese health authorities are examining the possibility of human-to-human transmission within a family of a new strain of bird flu that has infected 82 people so far, including 17 deaths.

China has warned that the number of infections, 82 so far, could rise. Four new cases of H7N9 bird flu were confirmed on Thursday in the commercial capital Shanghai and the provinces of Jiangsu and Zhejiang, according to local authorities.

Poultry is off the menu in many restaurants and off the shelves of many supermarkets around China, while authorities have slaughtered thousands of birds and closed some live poultry markets to slow the rate of human infection.


Face masks
People on the streets are wearing face masks, although because of pollution issues in major cities, it is hard to know whether they are worried about bird flu or particulate emissions.

Health officials are puzzled by the new H7N9 strain, particularly as to whether it can be passed between people.

The National Health and Family Planning Commission, China’s top health authority, said it was examining “family clusters” of people infected with the virus.

The family in question includes two brothers and their 87-year-old father, who died on March 4th and was reportedly China’s first human death from H7N9.

“Further investigations are still under way to figure out whether the family cluster involved human-to-human transmission,” said Feng Zijian, head of the emergency facility of the Chinese Centre for Disease Control and Prevention.

Experts were “still analysing in-depth to see which has the greatest possibility – did it occur first from avian-to-human transmission, and then a human-to-human infection, whether they had a common history of exposure, were exposed to infected objects or whether it was caused by the environment,” Mr Feng said.

What is proving particularly problematic is establishing whether the victims had contact with poultry.

Previous studies show that about 40 per cent of victims had no contact with poultry or environments where birds were located, but there are question marks over the accuracy of information collected.

“Only half of the sufferers could tell clearly if they were exposed to fowl or related environments,” said Mr Feng.

The World Health Organisation said this week several people who have tested positive for the new strain appear to have had no contact with poultry. The WHO had previously reported two suspected “family clusters”, but the first turned out to be a false alarm and the second was inconclusive.

Premier Li Keqiang promised at a meeting of the State Council, China’s cabinet, to use country-wide medical resources to combat the virus.

One restaurant chain in Chongqing, in the southwest, which features a lot of chicken dishes, has offered 600,000 yuan (€74,000) to the family of any customer who dies from H7N9 bird flu after eating at the restaurant.