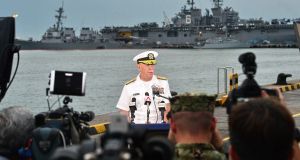 Admiral Scott Swift, commander of the US Pacific Fleet, speaks to reporters as the guided-missile destroyer USS John S. McCain is seen in the background, at Changi naval base in Singapore. Photograph: AFP/Getty Images

Divers have found human remains inside the US destroyer USS John S McCain, which collided with a merchant vessel this week.

Ten sailors were missing and five injured after Monday’s accident when the US naval destroyer collided with an oil tanker near Singapore.

“The divers were able to locate some remains in those sealed compartments during their search today,” US Pacific Fleet Commander Admiral Scott Swift told reporters on Tuesday.

He was speaking at Singapore’s Changi Naval Base, where the damaged vessel is docked.

Swift also said the US Navy was working to identify a body found by the Malaysian navy to see if it was one of 10 missing US sailors in the incident.

The USS John S McCain and the tanker Alnic MC collided on Monday while the US ship was nearing Singapore on a routine port call.

The impact tore a hole in the warship’s port side at the waterline, flooding compartments that included a crew sleeping area.