At least 100,000 anti-government protesters joined a mass rally in Hong Kong , filling major thoroughfares in heavy rain in the eleventh week of what have been often violent demonstrations in the Asian financial hub. Video: Reuters 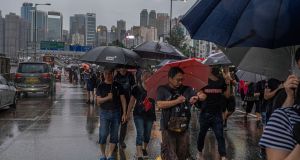 A sea of Hong Kong protesters marched through the dense city centre in the pouring rain on Sunday, defying a police ban, in a vivid display of the movement’s continuing strength after more than two months of demonstrations, days of ugly violence and increasingly vehement warnings from the Chinese government.

People began assembling in the early afternoon in Victoria Park, the starting point of huge peaceful marches in June that were joined by hundreds of thousands of protesters. The police approved the Sunday rally, but objected to plans to march to the Central district, citing clashes that had occurred after previous events. However, protesters marched anyway.

By mid-afternoon the park had filled with tens of thousands of people, and the demonstrators began to spill into nearby roads. Protesters holding signs jammed a multilane main road in the Causeway Bay shopping district, stopping traffic and forcing trams to slow to a crawl. The crowd inched toward the park amid heavy rain, shouting, “people of Hong Kong, keep fighting”.

Organisers estimated 1.7 million people had turned out – nearly one in four of the total population of more than seven million – making it the second largest march of the movement after a protest by nearly two million on June 16th.

The Hong Kong police released a far lower crowd estimate, saying there were 128,000 protesters in Victoria Park during the peak period.

Yet when the march reached the government headquarters in the Admiralty district, the line of people behind stretched nearly two miles, with large crowds still waiting to leave the park.

“I came here for the future of Hong Kong and the next generation of Hong Kong. The government has not responded to our demands,” said Amy Bau (41) a sign language teacher. “I have come out to march many times, and I will keep coming out if the government continues to not answer us.”

Joyce Man, a 26-year-old clerk, said she had joined despite her worries about the military being called upon to quell protests. “I still think my showing up is my responsibility. The more people in the street today, the safer Hong Kong people are. There’s strength when people unite.”

Roads and sidewalks across Hong Kong Island were filled with people on the march or trying to make their way to the start. Many subway trains skipped stops near the start, citing the large crowds, and traffic was snarled across many neighbourhoods.

The march was peaceful throughout the day, following several days of relative quiet and no use of tear gas by the police over the weekend.

Lawrence and Season Lee were marching on a highway with their three-year-old daughter, who tottered along in pink galoshes. Lawrence Lee said he knew that violence was always a possibility with the protests, but he felt Sunday’s march was too important to miss. “We can’t take it anymore. The government hasn’t given any response.”

The turnout was being closely watched as a gauge of public sentiment after several tumultuous days. One week ago riot police officers fired tear gas in one subway station and chased protesters down an escalator in another.

At Hong Kong airport days of sit-ins swelled to fill the main terminal, forcing the cancellation of hundreds of flights. The situation at the airport took a violent turn on Tuesday when protesters surrounded two men from mainland China, including one identified as a state media journalist, binding them and hitting them. That abuse provoked widespread condemnation from China and apologies from protesters.

In recent days the protests have quieted somewhat. The airport limited terminal access to passengers, halting demonstrations there. On Saturday, when protests were held at several places across the city, riot police officers chased off a few hundred black-clad demonstrators who had surrounded a station, but did not fire tear gas. The authorities later said a police officer had fired a bean bag round at a person who had thrown a trash can and other items at a police vehicle in the Mong Kok district.

Entering the weekend, the repeated call among protesters was to prepare to rally Sunday.

The protests began in June over a Hong Kong government proposal that would have allowed extraditions to mainland China. That legislation has been shelved, though not completely withdrawn, and the demands of the protesters have grown to include expanded direct elections and amnesty for arrested protesters.

Many protesters have complained about the use of force by the police, and have accused the authorities of not aggressively investigating thugs who have attacked demonstrators.

“This protest started because we didn’t agree with a government policy, but as time went on we discovered many bad things about the police and the criminals and other things that make us want to speak up,” said Paul Lam (25).

The Civil Human Rights Front, the group that organised the gathering, issued a long statement criticising what it called “Chinese-style repression” by the Hong Kong police, and called for top officers to step down.

“Today’s assembly continues the will of the two million people who marched on June 16th against brutality,” it said. “We want to gather the most Hong Kongers, and, using peaceful, rational and non-violent means, unite in spirit and action to express our indignation against police brutality, as well as display Hong Kongers’ firm resolve.”

The Hong Kong government responded that over the past two months police had faced protesters who blocked roads, vandalised public facilities, set fires and attacked officers with gasoline bombs and bricks.

“The police have been handling these illegal acts with tolerance,” the government said in a statement. “Only when they were violently attacked and left with no choice did the police use minimum force to disperse protesters in order to restore social order.”

The Chinese government has criticised the protests in strong terms, calling the airport violence “close to terrorism” and warning that the military could be called in. Paramilitary police officers have gathered for drills in the nearby city of Shenzhen, and a video carried by state media late Saturday showed hundreds of riot police officers with shields and batons charging at men dressed in black.