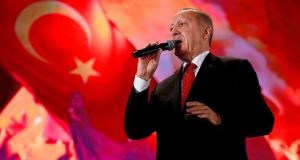 Turkish bar associations are for the first time boycotting a supreme court ceremony at President Recep Tayyip Erdogan’s palace, saying it undermines the separation of powers.

It’s the latest blowback against Mr Erdogan, who faces increasing criticism by some allies after his Justice and Development Party lost local elections this year in several cities, including Istanbul, Turkey’s biggest. The European Union has condemned political pressure on judges and prosecutors under Erdogan’s rule.

Several dozen provincial bar associations say they won’t attend the event on September 2nd, including those representing lawyers in Istanbul and Ankara, the capital. The choice of venue signals “the rejection of all teachings on democracy, law and justice,” the Istanbul Bar Association, which claims about 45,000 members, said in a statement.

“The separation of powers has been destroyed,” Mehmet Durakoglu, head of the Istanbul association, said. “This choice of venue by the supreme court displays where they stand on the issue.”

If Erdogan and the supreme court don’t get the message, “other protests may follow,” he said.

The supreme court denounced the protest in a statement on Sunday, saying the lawyers were out of line and the boycott “won’t evoke any response” from the broader public, the Anadolu news agency reported.

The ceremony marking the start of Turkey’s legal year was first held at Mr Erdogan’s palace in 2016 after a failed military coup that prompted him to consolidate the presidency’s powers. While the venue was changed in 2017 in response to criticism, it moved back to the palace again last year.

Not all lawyers’ groups are aligned with the protest. The Union of Turkish Bar Association said it would take part in the event. Its head, Metin Feyzioglu, will speak at the ceremony, Cumhuriyet reported. – (Bloomberg)

1 WHO warns of potential for ‘immediate second peak’ in Covid-19
2 Archaeologists are ‘quite sure’ they have found Red Hugh O’Donnell’s burial place
3 Coronavirus: What will reopen in Ireland’s phases to ease restrictions and what are the dates?
4 Coronavirus: No new Covid-19 deaths reported in State for first time since March
5 Tributes paid to Ireland’s deputy ambassador to China who died on Sunday
Real news has value SUBSCRIBE