‘Our biggest mistake was education, in particular ideological and political education’ 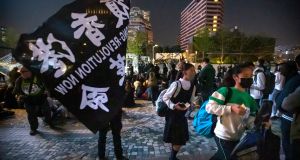 Protesters gather during a rally for secondary school students near the Hong Kong Museum of Art in December. File photograph: AP

Along with the thousands of protesters already arrested in Hong Kong, the city’s secondary school education system is now also in the dock and stands accused of being a leading agent provocateur.

As 2019 drew to a close, 2,393 students from 300 secondary schools had been arrested in connection with the pro-democracy protests – a high proportion of the 6,000 arrested in total.

And at least 80 teachers are among those arrested for protest-related activities, police confirmed. The education bureau has also received 123 complaints of teacher misconduct related to the ongoing unrest. Investigations into the teachers were ongoing, the bureau said, and aside from any legal punishment those found guilty may have their teaching licences revoked.

Pro-Beijing officials blame the schools for the upheaval. They say they can draw a direct line between a mandatory civics class known as liberal studies and the youths throwing petrol bombs at the city’s riot police. After pro-establishment parties got a drubbing in recent district council elections, outgoing politicians also pointed the finger of blame at the secondary school course.

Since the class became a fixed feature in Hong Kong secondary schools, teenage students have taken to the streets in numbers to fight different battles. Long before the current crisis, they protested against Beijing’s plans to introduce a “moral and national education” class – which they rejected as political indoctrination and brainwashing – and later they became the backbone of the 2014 pro-democracy Umbrella Movement.

Within the liberal studies syllabus teachers are given a broad framework to work with. The course is designed to instil critical thinking and covers a range of social, economic and political topics relating to Hong Kong, China and the world.

Critics say that teaching staff prejudiced against Beijing use the subject to stoke tensions in the classrooms and spawn a generation of radicals and rebels.

Issues such as the 1989 Tiananmen Square massacre, or the 2017 death in custody of Nobel Peace Laureate Liu Xiaobo could readily come up in a Hong Kong classroom – topics that mainland teachers would not dare broach.

The man who put the subject on the school curriculum now regrets his decision. Tung Chee-hwa, Hong Kong’s first leader after the British withdrew in 1997, called the liberal studies curriculum “a failure”. Assessing the recent chaos in the city, he said the subject was “one of the reasons behind the youth’s problems today”.

Since the British handover, Hong Kong is run under a “one country, two systems” framework, and the liberal studies debate is a prime exhibit of the inherent tensions between the two. One system values academic freedoms and encourages free expression, while the other prioritises patriotism and ideological control.

In the pre-handover negotiations with Margaret Thatcher’s government, Beijing agreed to leave Hong Kong to its freewheeling ways until at least 2047, but the recent unrest was sparked by the widespread perception that China has not kept its side of the bargain and is trying to tether the city.

From Beijing’s perspective, after the British took control of Hong Kong during the Opium Wars they had to endure a century and a half of humiliation before getting the territory back. Now the city has returned to the fold they see an increasingly alienated youth who identify as Hong Kongers, not Chinese; who want to speak Cantonese, not Mandarin; and who demand their own government, not Beijing’s. The prime demand of the current movement is for greater autonomy, but calls for independence are emerging too – a flashing red line for China’s leaders.

For the party, keeping a tight rein on the curriculum has always been seen as critical. Just five days after the bloodshed in Tiananmen, for example, former paramount leader Deng Xiaoping assembled a group of top cadres and soldiers in the capital and told them they had lost the support of the students in the country’s classrooms.

“Our biggest mistake was in the area of education, in particular ideological and political education,” he said.

Six months of spiralling violence have polarised positions in Hong Kong, and the search for solutions and causes has led to increased calls for educational reform. The classrooms may well be the next front line in this battle.