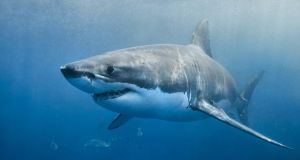 Australia ranked behind only the United States in the number of unprovoked shark encounters with humans in 2017. Photograph: iStock

A 12-year-old girl was attacked by a shark in waters off Australia’s tropical northeast coast on Thursday, an ambulance official said, the second attack in the tourist region in as many days.

Rescuers were called to Cid Harbour at Whitsunday Island, near the Great Barrier Reef, on Thursday afternoon and found the girl with bad leg injuries, said Tracey Eastwick, the regional ambulance operations manager.

The girl, who was on holiday with her father and sister, is in a critical condition and will undergo surgery.

“The patient’s injuries today are again a shark attack bite to the patient’s thigh area, with significant blood loss,” Ms Eastwick told reporters in Mackay, where the girl is in a serious condition in hospital.

“It is horrific . . . it is quite confronting to have two similar incidents in the space of 24 hours,” she said.

Australia ranked behind only the United States in the number of unprovoked shark encounters with humans in 2017, according to the University of Florida’s International Shark Attack File.

The island where the girl was bitten is a popular tourist site 900 km (560 miles) northwest of the state capital Brisbane.

Before this week’s events, the last shark attack in the area was eight years ago. The Queensland government will set three drum lines in the area in a bid to prevent any further attacks.

The attack followed the dramatic rescue of a 46-year-old woman, Justine Barwick, who was bitten by a shark while swimming at dusk from a yacht in the same area on Wednesday evening.

Ms Barwick was badly hurt on the upper right leg, ambulance officials said, and a doctor who was on a nearby boat attended to her until rescuers arrived by helicopter.

The doctor, John Hadock, was about to go for a swim when he was summoned to jump into a dinghy and rush to Ms Barwick’s aid.

“I was very worried that I might find severe bleeding still going. They had been able to stop the bleeding but Justine was very, very ill,” he told Channel Seven television.

Dr Hadock said he treated Ms Barwick before a helicopter crew winched her to safety and flew her to Mackay hospital, where a spokeswoman said Ms Barwick is in critical condition.

Last year, a spate of shark attacks off Australia’s northeast coast led to the controversial deployment of protective nets, which authorities said would save lives and guard the country’s reputation as a tourist destination.

Environmentalists say the nets can also harm a number of threatened and migratory species.

A teenage girl was killed in 2017 by a shark while surfing at a break in Western Australia, and a surf competition at Margaret River was cancelled after two surfers were bitten by sharks.–Reuters and PA