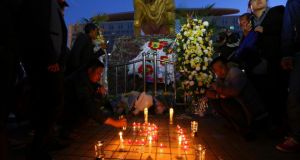 People light candles outside Kunming railway station after 29 people were hacked to death in an attack. Photograph: Wong Campion/Reuters

Sorrow prevailed outside the Kunming train station yesterday, days after 29 civilians were hacked to death with knives by rampaging men and women believed to be separatists from the restive province of Xinjiang.

The public reaction has been a mixture of shock and anger. Volunteers lined up at 12 mobile blood banks in the city to donate blood for the victims. The security presence in the city is heavy, and outside the station, where wreaths lie at the foot of a large statue of a bull, candlelit vigils have taken place.

There are regular reports of violence in Xinjiang as security forces clash with separatists, but the Kunming attack is the worst incident since riots in Urumqi in 2009.

One man came, his face wet with tears, to bid farewell to his friend.

“He was like a brother to me. I carried his body out of the station,” he said.

In all, 33 people were killed and more than 130 wounded when about a dozen men and women dressed in black, some wearing masks, went on a killing spree through the station, hacking at passengers randomly, just after 9.30pm on Saturday.

Four of the attackers – three men and one woman – were shot dead by police at the scene, while another woman suspect was arrested and is in custody while receiving medical treatment. The other assailants are still at large.

This correspondent had his press credentials examined outside the train station, which was crawling with secret police as well as uniformed officers and paramilitary police.

One woman spoke of how her friend was still in a coma after being slashed in the neck and head.

“It’s all because of the country’s lack of security,” she said before she was moved on by plainclothes police officers.

Evidence at the crime scene showed the attack had been orchestrated by Xinjiang separatist forces, the municipal government said in an article in the Communist Party’s official organ, the People ’s Daily .

Military expert Yin Zhuo said he believed the assailants must have come by road or rail from Xinjiang.

“The security check for airplanes especially is very strict. From Xinjiang to Kunming it can be done by road and rail. Or they can take different routes and then meet when they arrive. Moreover, Kunming is a tourism resort and there are many tourists. The alert on precautions is quite loose,” said Mr Yin.

Liu Jian of the People’s Liberation Army’s armaments department said: “The purpose of terrorism is to destroy our stable situation. They deliberately organised this terrorism attack to disturb our social stability and economic development.”

The attack appears to have been timed to coincide with the start of China’s annual parliament, the joint meetings of the National Committee of the Chinese People’s Political Consultative Conference and the National People’s Congress.


Silent tribute
Leaders gathered in the Great Hall of the People paid silent tribute to the victims of the terror attack as the consultative body began proceedings.

The largest province in China, Xinjiang accounts for 16 per cent of the country’s land area. Xinjiang’s 10 million-plus Turkic-speaking Uighurs are a Turkic Muslim ethnic group that shares close linguistic and cultural links to central Asia, and is quite distinct from China’s majority Han. Many feel overwhelmed by Han Chinese influence and vote with their feet by leaving the country.

Xinjiang has been part of many different empires over the years and always been difficult to rule.


Feuding warlords
The Manchus took control in 1755, but current rule by China is generally dated back to 1870, when Qing Dynasty generals crushed a Muslim rebellion led by Yakub Beg, who proclaimed an independent Turkestan in 1865. For much of the first half of the last century, Urumqi was a dangerous place, where feuding warlords battled for control and deadly intrigue was the order of the day.

One local Chinese governor, Yang Zengxin, invited his enemies to dinner in 1916 and had each one beheaded over the course of the meal. He was assassinated in 1928.

In 1955 Beijing named Xinjiang as an autonomous region – at that time 90 per cent of the population was non-Chinese. Since then, Xinjiang has seen a massive influx of Chinese who now dominate north of the region, while Uighurs are mostly located in the south.

A simmering separatist campaign in the region has occasionally boiled over into violence over the past 20 years.

The worst violence in recent years occurred during the deadly riots of July 2009, when local Uighurs savagely turned on Han Chinese in Urumqi – an incident that led to deadly reprisals a few days later. Nearly 200 people were killed in the riots, mostly ethnic Han Chinese, and 1,700 were injured.