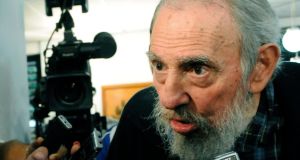 Saying he spoke as a friend, Fidel Castro wrote in Cuban state media that North Korea had shown the world its technical prowess and now it was time to remember its duties to others. Photograph: Marcelino Vazquez/Reuters

Former Cuban leader Fidel Castro warned ally North Korea against war yesterday and described the tensions on the Korean peninsula as one of the “gravest risks” for nuclear holocaust since the Cuban missile crisis in 1962.

Saying he spoke as a friend, Mr Castro (86) wrote in Cuban state media that North Korea, led by Kim Jong-un (30), had shown the world its technical prowess and now it was time to remember its duties to others.

North Korea, which along with Cuba is one of the world’s last communist countries, has been ratcheting up pressure by declaring war on neighbour South Korea and threatening to stage a nuclear strike on the US. Few observers believe it will actually attack anyone, but Mr Castro has become an anti-nuclear advocate in recent years.

“The Democratic People’s Republic of Korea was always friendly with Cuba, as Cuba always has been and will continue to be with her,” he wrote, using an almost paternalistic tone.

“Now that it has demonstrated its technical and scientific advances, we remind it of its duties to other countries who have been great friends and that it would not be just to forget that such a war would affect in a special way more than 70 per cent of the world’s population.”

Mr Castro called the situation “incredible and absurd” but said “it has to do with one of the gravest risks of nuclear war” since the Cuban missile crisis. He led Cuba through the showdown when the US and Soviet Union nearly went to war over the placement of Soviet nuclear missiles on Cuba, 44km (90 miles) south of Florida.

Mr Castro also said the US had a responsibility to prevent war, which he said if unleashed would make US president Barack Obama look like “the most sinister person in the history of the United States”. – (Reuters)