Ferry with 200 passengers capsizes in Bangladesh

About 100 passengers have been rescued from the vessel 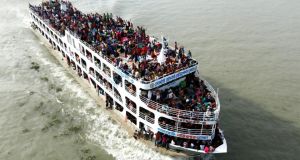 Homebound passengers on a ferry ahead of the Eid al-Fitr festival, in Sadarghat, Dhaka in Bangladesh on July 27th. Millions of city dwellers travel to their villages to celebrate Eid al-Fitr, which marks the end of the Muslim fasting month of Ramadan. Photograph: Abir Abdullah/EPA

A ferry with about 200 passengers aboard capsized today in the river Padma southwest of Dhaka and rescue teams took about half of them to safety, the chief of the district administration said.

Mohammad Saiful Hasan Badal, deputy commissioner of Munshiganj district, said about 100 passengers had been rescued from the vessel, identified as the MV Pinak-6.

No deaths had yet been reported.

Teams from the Bangladesh Inland Water Transport Authority, fire brigade and the army were engaged in the rescue operation about 30km southwest of Dhaka.

“Most of the passengers were coming back to the city from home after celebrating Eid-al Fitr,” Mr Saiful told Reuters, referring to the festival marking the end of the Ramadan fasting month.

A similar capsize occurred in May, when 54 bodies were recovered from a vessel that went down with around 200 people on board.

Low-lying Bangladesh, with extensive inland waterways and slack safety standards, has an appalling record of ferry accidents, with casualties sometimes running into the hundreds.

Overcrowding is a common factor in many of the accidents and each time the government vows to toughen regulations.