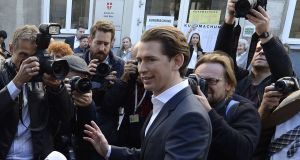 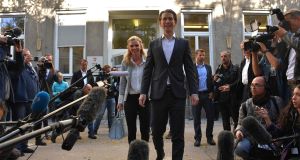 The leader of Austria’s right-leaning People’s Party has declared victory in a national election that puts him on track to become Europe’s youngest head of government.

Austrian foreign minister Sebastian Kurz (31) claimed the win on Sunday night after projections gave his party a comfortable lead with more than 90 per cent of the ballots counted.

The projections had the People’s Party (OVP) getting 31.4 per cent of the vote, a gain of more than seven percentage points from the 2013 election.

Final results will not be available until mid-week after absentee ballots and ballots cast by voters away from their home districts are counted.

The projections showed the centre-left Social Democrats (SPO) receiving 26.6 per cent and the vote and the anti-migrant, Eurosceptic Freedom Party (FPO) 26.5 per cent.

Mr Kurz’s party will be well short of a majority and could seek an alliance with the far-right FPO.

Mr Kurz campaigned on an anti-immigration platform so strict that the the FPO accused him of plagiarism. That appears to have succeeded in drawing some voters away from the FPO two years after Austria was swept up in Europe’s migration crisis, which boosted the right-wing party in polls.

Mr Kurz, named party leader only in May, has been careful to keep his coalition options open, but he called an end to the current alliance with the Social Democrats and pledged to shake up Austrian politics, which for decades has been dominated by coalitions between those two parties.

While that would suggest he will turn to the anti-Islam FPO, he has also said there could be leadership changes within the losing parties, a possible hint at being willing to work with the Social Democrats if chancellor Christian Kern were ousted as leader by defence minister Hans Peter Doskozil.

The Social Democrats (SPO) have also opened the door to forming coalitions with the FPO, meaning the far-right party is placed to be kingmaker and play the two parties off each other during coalition talks. It is highly unlikely, however, that the Social Democrats would be willing to be the junior partner to the FPO.

Immigration has dominated the campaign. Mr Kurz plans to cap benefits for refugees at well below the general level and bar other foreigners from receiving such payments until they have lived in the country for five years.

The FPO has accused Mr Kurz of copying its ideas and Mr Strache called him an “impersonator.”

The Social Democrats were hit two weeks ago by a smear scandal that forced their chairman to step down.

“You must ... go to your neighbours, go into bars, go to your friends and tell them what is at stake,” Mr Kern told a rally in Vienna on Saturday, calling Mr Kurz a candidate of the rich.

He warned of a repeat of the OVP-Freedom Party coalition in the early 2000s that was marked by financial scandals.