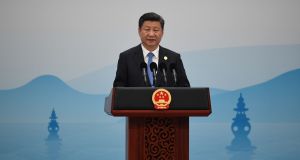 China has been working hard to foster international co-operation in hunting down suspected corrupt officials who fled with billions in funds, all part of president Xi Jinping’s corruption crackdown. Photograph: Johannes Eisele/AFP/Getty Images

China’s anti-corruption efforts have netted hundreds of fugitives fleeing graft investigations from overseas, including 33 of the Communist Party’s 100 most wanted suspects, the government watchdog said, along with 7.47 billion yuan (€1 billion) in bribes.

The Central Commission for Discipline Inspection (CCDI) said on its website that a total of 1,915 fugitives hiding in more than 70 countries and regions have been returned to China since 2014.

China has been working hard to foster international co-operation in hunting down suspected corrupt officials who fled with billions in funds, all part of president Xi Jinping’s corruption crackdown.

However, many western countries have been reluctant to sign extradition treaties with China because of fears about human rights, and they also complain about a lack of evidence.

In April 2015, the Interpol National Central Bureau for China released red notices, which is the closest instrument to an international arrest warrant, for the 100 most wanted Chinese fugitives abroad, including 40 thought to be hiding in the US, 26 in Canada and 10 in Australia.

Since then, more than one-third of those people have been caught, the CDDI said.

The 2014 campaign to find and bring back criminal suspects from overseas is called Operation Sky Net, which includes Fox Hunt, an operation to bring back suspects in economic crimes. It also has input from the Supreme People’s Procuratorate and the People’s Bank of China.

China has implemented the United Nations Anti-Corruption Convention and has been working with Canada, Australia, the US and other countries to share forfeited assets in an effort to target international organised crime.

As part of Fox Hunt, last month New Zealand police said they had reached a deal with a Chinese-born businessman, William Yan, for him to pay a record NZ$42 million (€27.7 million) fine to settle a legal action following an investigation with China into money laundering.

The CDDI also said that leaders attending the G20 summit in Hangzhou last weekend had agreed to set up a research centre in China to look at the issue of returning corrupt officials and their assets.

The summit also approved the “G20 High-Level Principles on Co-operation on Corruption Fugitives and Related Asset Recovery”, which has for the first time put forward a zero-tolerance attitude toward fugitives and their stolen assets, Cai Wei, deputy director of the international co-operation bureau of the CCDI, told in-house media.