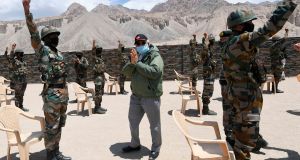 China has started pulling back troops who have been locked in a standoff with the Indian army since early May along their disputed border in the northern Himalayan Ladakh region bordering Tibet.

Tensions have been high since at least 20 Indian soldiers and an unspecified number of Chinese People’s Liberation Army personnel died after a fight lasting hours in mid-June in the 4,260m high freezing Galwan Valley region, in which opposing troops fought one another with clubs wrapped in barbed wire, rocks and iron rods.

Both officials have been designated special representatives by their respective countries to negotiate a settlement of their de facto border – called the Line of Actual Control or LoAC – over which the neighbours fought a war in 1962, in which India came off worse.

India’s foreign office said on Monday that the two representatives had agreed not to “allow differences to become disputes”by ensuring complete disengagement of troops along the LoAC.

The ministry said the two negotiators had also agreed to continue their conversations to ensure “full and enduring restoration of peace and tranquillity” along the India-China border.

India accuses the PLA of incursions across the LoAC in at least seven places since early May over a 150-200km mountainous stretch into territory it perceives as its own, and backing this up with the threatened use of howitzers, tanks, missile batteries and combat aircraft.

In response, India has amassed troops, offensive platforms and fighters on its side of the disputed border, raising the spectre of a potential conflict between the two nuclear-armed powers.

The BJP has also launched a countrywide campaign to ban Chinese goods with the aim of reducing the trade deficit between the two sides, which significantly favours Beijing.

The LoAC is one of the world’s longest running border disputes which remains unsettled despite one war and innumerable negotiations thereafter between officials from both sides, the last being in December 2019.

India accuses China of recalcitrance in this regard and of not even exchanging maps indicating Beijing’s perception of the LoAC. China, for its part, wants the border dispute to be adjourned and other aspects such as trade and commerce to determine bilateral ties with Delhi.

Consequently for over three decades the armies of the world’s two most populous countries have been engaged in patrolling the LoAC, which stretches for 4,057km across the Himalayas.

Since 1993 this patrolling has been executed under mutually agreed protocols instituted under four agreements that impose a host of operational constraints on both armies.

These include a ban on the use – but not carrying – of firearms by the respective forces, as well as either side not gesticulating in any manner that could be construed as hostile or even raising their arms above shoulder level.

However, in recent years these protocols have broken down, and the two sides have been locked in faceoffs of varying intensity that have been resolved through dialogue, though none has been as serious as the most recent impasse.