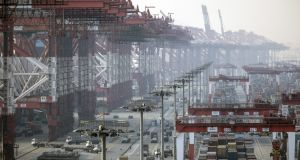 Cranes at the Yangshan deepwater port in Shanghai. China’s economy picked up speed in the fourth quarter, with growth beating expectations as it ended a rough coronavirus-striken 2020 in remarkably good shape and remained poised to expand further this year. Photograph: Qilai Shen/Bloomberg

China was the largest recipient of foreign direct investment in 2020 as the coronavirus outbreak spread across the world during the course of the year, with the Chinese economy having brought in $163 billion in inflows.

China’s economy picked up speed in the fourth quarter, with growth beating expectations as it ended a rough coronavirus-striken 2020 in remarkably good shape and remained poised to expand further this year even as the global pandemic rages unabated.

China’s gross domestic product grew 2.3 per cent in 2020, official data showed last week, making China the only major economy in the world to avoid a contraction last year. The world’s second-largest economy has surprised many with the speed of its recovery from the coronavirus jolt, especially as policymakers have also had to navigate tense US-China relations on trade and other fronts.

“FDI finished 2020 more than 30 per cent below the trough after the global financial crisis in 2009”, the UNCTAD said on Sunday.

FDI flows fell by 37 per cent in Latin American and the Caribbean, by 18 per cent in Africa, and by 4 per cent in developing Asia, the report added. East Asia accounted for a third of global FDI in 2020, while FDI flows to developed countries fell by 69 per cent. – (Reuters)