Australia in limbo after bad-tempered election 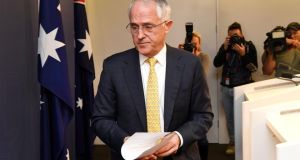 Australian prime minister Malcolm Turnbull on Saturday, a day after the election. Turnbull is looking to independents and smaller parties for support. Pphotograph: William West/AFP/Getty Images

For the second time in three elections, Australians could be in for a long wait to find out who will form the next government.

With three-quarters of the vote counted and 13 of the lower house of parliament’s 150 seats still too close to call, the count was suspended at midnight on Saturday. Counting will not resume until Tuesday, allowing for the more than one million postal votes to be distributed to count centres around the country.

As things stand, the Liberal- National coalition government has won 65 seats, the Labor opposition has won 67 and minor parties and independents have five. Seventy-six seats are needed for majority government.

The coalition, which had 90 seats in the outgoing government, has already lost 11 and is very likely to lose more.

Every poll in recent weeks suggested that while there would be a swing to Labor, it would not be enough to deny the coalition a majority. This may still prove to be the case, but very few predicted the possibility of another hung parliament.

Australia’s 2010 federal election was a similar cliffhanger. Neither Labor nor the coalition had a majority on their own, and it took Labor 17 days to form a government with the backing of Greens and independents.

It will probably not take that long this time. But however long it takes, and regardless of who forms a government, the result is a disaster for prime minister Malcolm Turnbull. He deposed former prime minister Tony Abbott in an internal Liberal Party coup last September because, he said, Abbott could not beat Labor.

Many of those who backed Turnbull have now lost their seats, and the coalition could be about to lose power.

“In the past eight weeks we have run a magnificent campaign,” he said. “We have argued for our positive plans and, three years after the Liberals came to power in a landslide, they have lost their mandate.”

Turnbull kept his supporters waiting until well after midnight before emerging from his waterfront mansion in Sydney’s eastern suburbs.

The sparse crowd still waiting at the Liberal Party’s gathering in a city centre hotel heard him give a truculent speech where, fists clenched, he said that “the circumstances of Australia cannot be changed by a lying campaign from the Labor Party”.

The supposed “lying campaign” Turnbull was referring to was Labor claim that the coalition planned to privatise Medicare, Australia’s universal health system. It proved so effective the Liberals had taken to calling the campaign “Mediscare”.

Still, there was more than a grain of truth to it. In the past three years, the coalition froze the amount of money paid to doctors for seeing patients, increased fees on pathology and radiology, raised the cost of medicines, and hired a task force to privatise Medicare’s billing system.

That’s a lot of smoke even if there was, apparently, no fire.

Those calls must have been difficult for the prime minister, given that he said voting for Independents or smaller parties would be chaotic and a disaster for the country.

Labor’s most prominent members of Irish background all did better than expected.

Brendan O’Connor, who was educated by the Christian Brothers in Tralee, won 62.9 per cent of first preferences in his Melbourne seat. Deborah O’Neill, a former Sydney Rose of Tralee whose parents were both Irish, was re-elected to the senate. And David Feeney, whose father was from Belfast, is likely to retain his seat despite a 10 per cent swing against him after a gaffe-strewn campaign.

After the shock of how the vote has turned out, Turnbull could be forgiven for thinking that with friends like he has, who needs enemies.

In the week before polling day, every metropolitan newspaper bar one advocated a vote for the coalition (the lone exception being Melbourne’s Sunday Age). Rupert Murdoch’s News Corporation owns most of those papers, and they have already begun to turn on the prime minister.

Within hours of the polls closing, one Murdoch tabloid columnist had already called on Turnbull to resign.