US election: ‘Donald Trump needs to go. White America got what they want’

After a troubled summer in Louisville, Kentucky, black voter turnout will be revealing 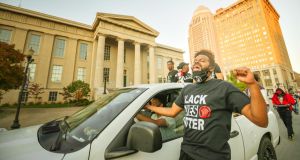 Last June, Marvin McAtee fielded questions from a reporter days after his uncle David McAtee was shot dead in a confrontation with the Kentucky National Guard.

With gold teeth, a baseball cap pulled low over his forehead and a gold chain draped around his neck, Marvin told The Irish Times from outside his recently deceased uncle’s barbecue shack how he thought the protest movement engulfing cities around the country at the time would change little for black Americans.

Less than three months later he too was dead, shot just feet from where his uncle was killed.

“They killed him right over there,” says Andre Russell, who knew Marvin, pointing to a small group of flowers and alcohol bottles collected on the side of 26th Street in the city’s West End district in his memory. “The barbecue place – it’s closed down. They’re clearing it out.”

In perhaps any other year, the loss of two members of one family to gun violence in the same summer would have prompted public discussion and efforts by local authorities to reel in such attacks in Louisville.

Instead, the police killing of Breonna Taylor as she slept in her bed in a botched drug raid in March has turned the city into a centre point for the Black Lives Matters protest movement that swept across the US following the police killing of George Floyd in Minneapolis on May 25th. All summer long Taylor’s name has been chanted at hundreds of protests across the country.

By June some groups of demonstrators in Kentucky’s largest city were failing to observe night-time curfews. Looters destroyed stores in the city’s West End, a predominantly African-American district suffering myriad socio-economic problems. Police were being fired upon when responding to emergency callouts.

Protesters in Louisville were further roiled when, on September 23rd, a grand jury failed to bring direct charges against officers involved in Taylor’s death, though one – detective Brett Hankison – was fired for shooting his weapon blindly.

Police brutality remains a major election issue for African-Americans and others, and many are wondering whether turnout among the black community may help decide who becomes the next president of the United States.

See Swing State Polls
Inside Politics · A dramatic week in Covid, Brexit and the US election

Some 4.5 million fewer people voted in 2016 compared with 2012, and about a third of them were black. This year turnout among African Americans will be closely watched.

Black Americans, broadly supportive of the Democratic Party, have been badly hit by Covid-19, with twice as many dying from the virus as white Americans. The economic fallout of the pandemic has seen almost 60 million claims for unemployment assistance filed, with people of colour disproportionately affected.

All the while, President Donald Trump’s refusal to condemn white supremacists has been especially horrifying for African-Americans.

Of the seven African-Americans interviewed for this article, five say they have already cast their ballot for Joe Biden through an early voting option, with the remaining two pledging to vote for the Democratic nominee. And although Trump is expected to carry Kentucky, the sentiments expressed by people here are thought to be mirrored by black communities in key swing states such as Pennsylvania, Ohio, Michigan and Florida.

To be sure, not all of Louisville’s black population suffers from poverty and violence. However, the city finds itself in the throes of a record homicide spree that has disproportionately affected residents of the West End district.

By early August, the city had passed last year’s total of 88 murders. On September 19th, the day Marvin McAtee died, Louisville recorded its highest ever number of homicides inside a calendar year.

“In recent years we’ve never seen violent crime hit teenagers ... like we’ve seen it this year,” says Christopher 2X, executive director of Game Changers, a non-profit that supports children and families affected by gun violence. “I think it’s been a continuum of them being exposed to and impacted by the constant gunfire that’s been going off in the neighbourhoods.”

Brittany Andrews, from the city’s West End, says the biggest challenges the area faces are economic-related. In the West End’s Russell neighbourhood, where Marvin McAtee was shot dead, the average household income is about $15,000 (€12,640) a year for some families.

Andrews, who works in dental prosthetics, says there’s only one restaurant from here to 28th street, a distance of almost 2km but home to thousands of people.

“We need more businesses. At every corner you see a liquor store or a Family Dollar [a discount chain]. That’s all we got,” she says.

The jobs that are available in the West End don’t pay enough, she says, while the health insurance she receives is also inadequate.

But in this election season, big-picture issues colour her political preference. “On the first day of early voting, I voted – me and my 18-year-old daughter. If I had to stand there all day I would have,” she says.

Her motivation stems not from Joe Biden having served for eight years as vice-president to Barack Obama, the country’s first black president, but primarily because she wants to see Trump unseated.

“Racism has always been in the world, but since Donald Trump got into office, it’s got worse,” she says. Most of her friends and family have already voted, too. The Breonna Taylor Foundation is working to further increase participation by offering free lifts to polling booths for early voting across Louisville this month.

Andrews points out how in December, Democrat Andy Beshear, who was voted in as Kentucky’s governor last year, passed a Bill restoring voting rights for more than 152,000 people with non-violent criminal records, a ruling that overwhelmingly affects black voters. One of those affected is the father of Andrews’s children. “He has already voted,” she says.

This, together with the damage Covid-19 has inflicted on black Americans and Trump’s support for law enforcement, have pushed many towards supporting Biden. “Donald Trump needs to go. White America got what they want. Now it’s time for real Americans to get what they want,” says Andrews.