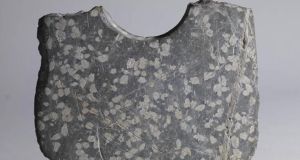 Archaeologists digging in eastern China believe they have discovered some of the world’s oldest forms of primitive writing on stone axes dating from 5,000 years ago.

Some of the markings cut into the broken axes discovered to the south of Shanghai are similar to Chinese characters used today, say researchers. They are some 1,400 years older than the oldest written Chinese characters, which were found on “oracle bones”.

Until now, Chinese written text was believed to date from the oracle bone scripts, which were inscriptions on turtle shells dating back to the late Shang dynasty.

The axes were unearthed in Pinghu, in Zhejiang province, and are believed to belong to the Liangzhu civilisation of the Neolithic Age.

Six word-like shapes
The pieces were discovered among thousands of other fragments from the site between 2003 and 2006, said lead archaeologist Xu Xinmin.

One of the pieces has six word-like shapes strung together to resemble a short sentence. The six characters are arranged in a line, and three of them resemble the modern Chinese character for human beings. Each shape has two to five strokes.

“They are different from the symbols we have seen in the past on artefacts,” said Mr Xu.

Scientists are divided over whether the writing is made up of words or of symbols.

Li Boqian, an architecture professor at Peking University, told local media that, unlike other original texts, these characters could be grouped into sentences.

However, Wang Jianjun, a philology professor at Zhengzhou University, said: “These symbols may have some language features, but it is too hasty to compare it with the systematic language on oracle bone script.”

Cao Jinyan, a scholar on ancient writing at Zhejiang University in Hangzhou, believes the markings could be an early form of writing.

“If five to six of them are strung together like a sentence, they are no longer symbols but words. Although we cannot yet accurately read the meaning of the ‘words’ carved on the stone axes, we can be certain that they belong to the category of words, even if they are somewhat primitive.”