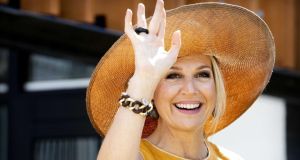 Dutch centre-left parties have said Queen Maxima in was placed in ‘an impossible position’ by allowing the meeting with the crown prince to go ahead. Photograph: Patrick Van Katwijk/EPA

The Dutch government has strongly defended Queen Maxima after she was criticised by a senior UN official for meeting the Saudi crown prince, Mohammed bin Salman, at the G20 last weekend without mentioning the assassination of the journalist Jamal Khashoggi.

Agnes Callamard, the UN investigator whose report last month concluded that the Saudi state was responsible for Khashoggi’s killing and that there was credible evidence that the crown prince may have known about it in advance, was scathing about Maxima’s failure to speak out.

“It is one thing to meet this man, but quite another to meet him and say nothing,” Ms Callamard told Dutch newspaper AD, when asked about the crown prince’s meeting with the queen in her role as a UN ambassador specialising in access to “inclusive finance” in developing countries.

“If you do not speak and you do not demand justice, it suggests you have no concerns,” added Ms Callamard, who also used a speech at the Brookings Institution in Washington on Tuesday to criticise the world’s wealthiest nations for failing to hold Saudi Arabia to account.

The UN investigator’s comments were angrily rejected by prime minister Mark Rutte and foreign affairs minister Stef Blok. However, both men were attacked by centre-left parties, D66 and GreenLeft, for placing the queen in “an impossible position” by allowing the meeting to go ahead.

Mr Rutte said it would have been “completely inappropriate” for Maxima to have placed the Khashoggi affair on the agenda for the meeting – which she would have to have done in order to raise it – when it was already being dealt with by the two countries on a bilateral basis.

“The Netherlands has already expressed its disgust at the killing of Mr Khashoggi through the appropriate channels, I assure you,” Mr Rutte said.

Mr Blok argued that for the government to have cancelled the meeting would have meant interfering politically in the work done independently by the queen, formerly a banker with HSBC, Dresdner Kleinworth, and Deutsche Bank.

He said the brief meeting had focused on “ways of improving the economic position of women in Saudi Arabia”.

This failed to convince GreenLeft MP, Bram van Oijk, who accused the government of sending Maxima “into a political minefield” by allowing her to sit down with Crown Prince bin Salman, in the full glare of the international media on the fringes of the Tokyo summit.

D66 foreign affairs spokesman Sjoerd Sjoerdsma said the meeting had again allowed the Saudis to present the crown prince to the world as “a credible leader” – while the Dutch had been left looking as if they knew “nothing about diplomacy and even less about image management”.