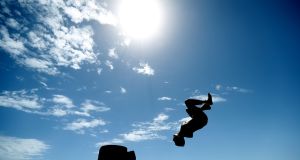 Teens jump off the jetty at Glenelg beach during a hot day in Adelaide, Australia. Photograph: Kelly Barnes/EPA

The South Australian city of Adelaide set a new record high temperature Thursday as the country continued to broil in an extended summer heatwave that has put pressure on the power grid and fired up climate change concerns.

The Adelaide suburb of West Terrace recorded 46.2 degrees, according to the Bureau of Meteorology, beating the previous record of 46.1 set in 1939. The heat proved expensive for one pub in the city that had promised free beer if the mercury rose above 45 degrees.

The scorching temperatures even hit the Australian Open in Melbourne, one of the four Grand Slam tennis tournaments, with its new Extreme Heat Policy suspending play to protect the players’ health.

As homes and businesses crank up air conditioners to cope with the heat, the energy market operator warned of potential electricity supply shortfalls in South Australia and Victoria. The hot temperatures are expected to continue into Friday, before cooler weather is forecast to sweep through by mid-afternoon.

The world’s driest inhabited continent is in the grip of an extended heatwave, posting the hottest December on record, according to the Bureau of Meteorology. Bushfires are a constant threat, with much of Victoria and the island state of Tasmania under severe to extreme fire danger, the bureau said in a statement Wednesday. – Bloomberg

Davy scandal: The who, what, where, when and why?