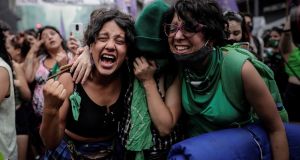 Women celebrate the approval of the abortion law in front of Argentina’s Congress in Buenos Aires on Friday. Photograph: Juan Ignacio Roncoroni/EPA

Lawmakers in Argentina’s lower house have passed a Bill that would legalise abortion in most cases, in a big step forward for the legislation that could set the tone for a wider shift across Latin America.

The landmark Bill, which needs approval from the country’s Senate in a debate expected before the end of the year, allows for voluntary abortions to be carried out up to the 14th week of pregnancy.

Backed by President Alberto Fernández, the Bill was approved in a 131-117 vote with six abstentions after a marathon debate that extended from Thursday into the early hours of Friday morning.

Demonstrators in favour of decriminalising abortion, who had spent the night outside the Congress building in Buenos Aires, erupted with joy and embraced each other as they listened to the parliamentary speaker reading the vote’s results on screens.

Hundreds of meters away, not far from the parliament building, hundreds of opponents dressed in light blue and carrying the national flag deplored the result, with some shedding tears.

The push for reform in Argentina is part of a pro-choice “green wave” sweeping through Latin America, symbolised by the green handkerchief that has become the campaign’s instantly recognisable flag across the entire region.

The lack of legal abortion has condemned millions of teenagers across the region to carry unwanted pregnancies to term. In Argentina alone, more than 7,000 girls ages 10 to 14 delivered babies in 2016-2018, frequently the result of rape, according to a recent report by Argentina’s Access to Safe Abortion Network.

“We are convinced that this offers a concrete answer to an urgent and structural public health problem,” said Elizabeth Gómez Alcorta, the government’s women, gender and diversity minister, as she opened the session. “The time has come to stop looking the other way.”

Speaking before the Bill was passed, Gabriela Cabezón Cámara, a prominent Argentinian intellectual and author, said its approval would “stop us from being used as birthing machines and allow us to be treated as human beings with a right to decide over our own bodies and destiny”.

The outlook for the Bill is less clear in Argentina’s Senate. Two years ago, during the administration of more conservative president Mauricio Macri, the upper house voted against a similar Bill to legalise abortion after it was narrowly approved by the lower house.

Undergoing a termination remains punishable by law across Latin America, where the strong influence of the Catholic Church has helped keep abortion illegal across most nations. Many women end up in prison for seeking medical assistance after a spontaneous miscarriage.

Abortion is completely prohibited in El Salvador, the Dominican Republic, Nicaragua and Honduras, while exceptions are made in cases of rape or to save the woman’s life in other nations such as Brazil or Chile.

In Latin America, abortion is legal only in Cuba and Uruguay, both small countries where the Catholic Church has less influence. Elective abortion is also legal in some jurisdictions of Mexico, as well as in the South American nation of Guyana and the French overseas department of French Guiana.

A change in the law in Argentina, the home country of Pope Francis, would send a loud signal across a region where demand for legal abortion continues to grow.

The toll on Argentinian women is harrowing. Nearly 40,000 women were admitted to public hospitals for complications arising from illegal abortions in 2016 alone, according to a new report. Of these admissions, 6,400 corresponded to girls and teenagers ages 10 to 19.

At least 65 women died after undergoing back-street interventions in the 2016-2018 three-year period, about half of them in their 20s and nine of them just teenagers.

At least 73 women, as well as doctors and nurses, have gone to prison or been held under temporary arrest on illegal abortion charges in Argentina since 2012, say pro-abortion campaigners.

The setback in 2018 gave new impetus to Argentina’s feminist campaigners, and with the coronavirus pandemic eating away at support for his administration, Mr Fernández is eager to fulfil a 2019 electoral pledge to legalise abortion. – Guardian