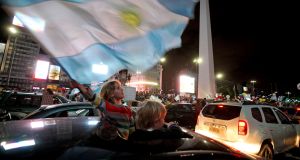 Conservative opposition challenger Mauricio Macri won Argentina’s presidential election on Sunday, bringing to an end more than a decade of free-spending leftist populism with a promise to open up the ailing economy to investors.

With the count nearly completed, Mr Macri won 51.5 per cent of the vote in the run-off election to 48.5 per cent for ruling party rival Daniel Scioli, a smaller margin of victory than expected.

Mr Macri’s supporters swarmed around the iconic Obelisk in the heart of Buenos Aires’s theater district as passing cars blared their horns in celebration.

“This is the beginning of a new era that has to carry us toward the opportunities we need to grow and progress,” Mr Macri told supporters at his headquarters, which pulsed with Latin music and was festooned with white and sky-blue balloons, the colors of the Argentine flag.

The victory marked a stunning turnaround for the two-term mayor of the capital Buenos Aires, who had looked a distant prospect just a month ago. He will be sworn in December 10th.

The upset ends 12 years of Peronist-run governments under Fernandez and her late husband Nestor Kirchner, a power couple who emerged after Argentina’s epic economic collapse in 2001-02.

Painted by Mr Scioli as a neoliberal bent on placing the interests of big business before workers, Mr Macri had trailed his rival in opinion polls throughout months of campaigning.

However, he blindsided Mr Scioli and the ruling Front for Victory Party with a strong performance in the first round of voting last month and quickly became the favorite as pollsters showed swing voters rallying behind his “Let’s Change” alliance.

“There’s been so much corruption and the economy has been poorly managed,” said Romina Casela (41) who swung behind Mr Macri for the second round. “I have faith Macri will be an honest politician.”

From soccer to politics

His win may send shockwaves through South America’s other left-leaning governments, such as Venezuela and Brazil, which are also grappling with the end of a decade-long commodities boom and accusations of financial mismanagement.

The 56-year-old son of an Italian-Argentine construction magnate, Mr Macri inherits a fragile economy: growth is underpinned by unsustainable public spending, inflation is estimated at well above 20 per cent and the central bank is running perilously low on currency reserves.

Argentina is also in default on its sovereign debt.

Mr Macri has said he will negotiate hard in search of a deal needed to regain access to global credit markets. He also promises to move swiftly to dismantle Mrs Fernandez’s web of capital controls and trade restrictions.

But he could risk triggering an economic shock that drops the country into recession if his reforms are too abrupt.

Mr Scioli had described Mr Macri’s pro-market reforms as “a danger to society”, warning he would cut welfare benefits, hike energy tariffs and throw Argentina back to the right-wing policies of the 1990s that preceded the crisis that plunged millions into poverty.

It was a message that resonated with some voters.

“Macri sees social spending as an expense rather than an investment. He is a neo-liberal and we know how that ends,” said architect Leandro Gorosito.

Mr Macri won despite cutting the figure of an uncomfortable politician and having to battle a perception among the lower classes that he is a capitalist with little interest in helping the poor.

With 43 million people, gross domestic product of $540 billion and a territory nearly the size of India, Argentina has for long fallen short of its potential.

Bond and equity markets are likely to extend dizzying gains made since the first round of voting on Oct. 25. Argentina’s Merval stock index surged 25 per cent in the past four weeks as investors bet on a Macri win.

“Bond and stock markets will enjoy the afterglow into the new year,” he added

Mr Macri’s win marks a decisive shift to the centre-right and raises the prospect of improved ties with the United States and European Union, as well as freer-trading, faster growing countries on the Pacific coast that include Chile and Peru.

Even so, Mr Macri’s top foreign policy priority will be to rebuild Brazil’s confidence in a troubled trade relationship and he has said his first trip abroad will be to meet with Brazilian President Dilma Rousseff.