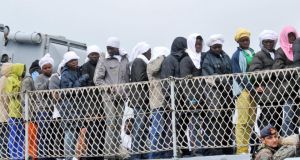 Migrants wait to disembark from an Italian navy ship in Sicily after being rescued from a Turkish cargo ship in 2009. Photograph: AP


When the Arab spring surged into full force, most Europeans hailed the revolutionary events as a triumph for democracy.

But the overthrow of regimes across the upper edges of Africa and into the Middle East also had more serious consequences for Europe. As thousands of refugees moved to escape the chaotic remnants of their countries, many turned to their neighbours in southern Europe for refuge.

Today’s report from Amnesty International is strident in its criticism of Europe’s response to asylum seekers. “The European Union implements border control measures that put the lives of migrants and asylum seekers at risk and fails to guarantee the safety of those fleeing conflict and persecution,” the report states.

The upheavals in North Africa have generated a refugee crisis for Europe in recent years, particularly for the bloc’s “southern maritime borders”, as Europe’s Mediterranean coast is known in EU parlance.


Deadly stretch
Last year the United Nations High Commissioner for Refugees reported that the Mediterranean Sea has become the deadliest stretch of water in the world for migrants and refugees. The UN agency estimates that more than 1,500 people drowned or went missing while trying to cross the sea from Africa to reach Europe in 2011.

Political tensions over the influx of immigrants surfaced just over two years ago, when the Italian and French heads of state Silvio Berlusconi and Nicolas Sarkozy called for a partial reintroduction of national border controls across Europe. Tens of thousands of North African migrants, mostly from Tunisia, had been arriving in Italy, before making their way on to France. The controversy revealed the difficulties in implementing the Dublin convention, a key EU law which states that a refugee must make an application for asylum in the country where she or he first arrives.

Italy, in particular, came into the spotlight, as images of overcrowded boats carrying Libyan refugees landing on the island of Lampedusa made world news. The Mediterranean country witnessed the arrival of more than 50,000 North African refugees in the first nine months of 2011 alone.

Last year the Council of Europe sharply criticised Italy’s human right record, highlighting the case of an abandoned eight-storey building on the outskirts of Rome that houses 800 refugees from the Horn of Africa, with one bathroom for every 100 residents. It followed the outlawing by the European Court of Human Rights of Italy’s policy of intercepting migrants in the Mediterranean and handing them back to Libya. The Amnesty report also found that conditions in detention centres for irregular migrants fell well below international standards.

More recently, attention has focused on Greece, and the Eastern Mediterranean region generally. In January this year the Council of Europe raised concerns about Greece, one of the main destinations for refugees from North Africa, which has also seen a huge increase in the number of Syrian refugees entering through Turkey.

Noting that Greece had refocused its attention on reinforcing its external borders, Greece operates a policy “which relies too heavily on detention”, the report found, calling on Europe to share responsibility for Syrian refugees and asylum seekers through “intra European Union relocation”.

The most recent European Union figures show that 332,000 asylum applicants were registered across the 27 member states last year.


EU response
In many ways, the refugee crisis has shifted geographically to the east, with the highest proportion of asylum seekers arriving into Europe originating from war-torn Afghanistan and Syria. But Amnesty’s report raises questions about the European Union’s policy response to refugees, including across the Mediterranean belt.

While there have been widespread moves towards harmonising member states’ approaches to asylum seekers, countries retain a relatively large degree of sovereignty over the way asylum seekers are treated, and there are big differences between countries in their approach to applications, detention and protection.

Critics denounce the EU as being too focused on surveillance and border control; the EU argues that it is reflecting a political and social reality, and is making strides towards greater harmonisation and engagement through programmes such as the Common European Asylum System and mobility partnerships with non-EU countries.

But as Europe’s attention turns to Bulgaria and Romania’s accession to Schengen, the plight of asylum seekers may fall down the agenda in terms of EU priorities.