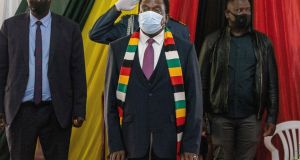 Zimbabwe’s president Emmerson Mnangagwa has accused his political opponents of working with foreigners to destabilise the country. Photograph: EPA

Zimbabwean president Emmerson Mnangagwa’s government has summoned the Vatican’s diplomatic representative in Harare to clarify its position on criticism of the country’s deteriorating situation by local Catholic bishops.

On August 16th the Zimbabwe Catholic Bishops Conference (ZCBC) issued a strongly worded pastoral letter calling for the resolution of the country’s mounting challenges, which it said were being exacerbated by “alarming levels” of corruption.

With inflation running at more than 800 per cent, Zimbabwe is slipping into its worst economic crisis since 2009, when hyperinflation exploded under former president Robert Mugabe, whose 37-year rule was ended in October 2017 by an army coup.

In addition, Zimbabwe’s recently fired health minister Obediah Moyo was charged with corruption last month linked to the €51 million ($60 million) procurement of coronavirus test kits and medical equipment. The government is also accused by its critics of using the coronavirus pandemic to clamp down on dissent.

The developments have heaped pressure on Mr Mnangagwa and his ruling-party supporters, who have repeatedly promised to revive the economy and change Zanu-PF’s dictatorial approach to governance since his disputed election in August 2018.

However, Zimbabweans who have sought to hold anti-government protests over the country’s worsening plight since Mr Mnangagwa took power have been abducted, tortured and murdered, or forced into hiding, according to human rights activists.

The president has accused his political opponents of working with foreigners to destabilise the country. In early August he publicly labelled those opposed to his rule as “bad apples” and warned the government would deal with them harshly.

Up to 20 people suspected of organising anti-government protests on July 31st have been accused by prosecutors of inciting public violence, including high-profile Zimbabwean journalist Hopewell Chino’no, whose work led to former health minister Moyo’s arrest.

Mr Chino’no, who was arrested and charged in mid-July, has so far been denied bail by the courts. His lawyer, Beatrice Mtetwa, has been barred from representing him by the magistrate overseeing the case because she allegedly ran Facebook pages that undermined the country’s justice system. She has denied any knowledge of the pages.

The local church leaders’ appraisal of Zimbabwe’s situation has been criticised by Mr Mnangagwa’s administration, which has called their letter an “insult” to his presidency. The government now wants to know if the Vatican endorses the bishops’ point of view.

Information minister Monica Mutsvangwa called the ZCBC’s president, Archbishop Robert Ndlovu, who is a member of the minority Ndebele ethnic group, “evil-minded” and accused him of fanning ethnic divisions.

Human Rights Watch’s southern Africa director Dewa Mavhinga told The Irish Times the government’s clash with the Catholic Church is a sign of growing pressure on Mr Mnangawa’s administration from all sides of society.

“People inside and outside the ruling party are beginning to understand they will have to remove Mnangagwa and his regime to get rid of it. Life in Zimbabwe is far more difficult now than it was under Mugabe, but the government is ignoring citizens’ plight,” he said.

Mr Mnangagwa appears so intent on downplaying the crisis in Zimbabwe that he reportedly banned an envoy from South African president Cyril Ramaphosa sent to the country recently, to assess the situation, from meeting anyone outside of his government.

Mr Mavhinga said the human rights and economic situation in Zimbabwe has deteriorated to such an extent that he would not be surprised if a coup d’etat is attempted to remove the president.

“It could be instigated by senior army generals, or even by lowering ranking officers and soldiers struggling to survive the economic meltdown,” he concluded.