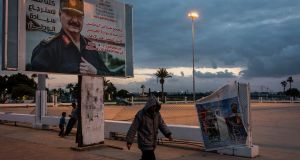 A string of victories by Turkish-backed forces in western Libya this week dealt a heavy blow to the ambitions of aspiring strongman Khalifa Hafter and signalled the arrival of Turkey as a potentially decisive force among the foreign powers battling for supremacy in the Middle East’s biggest proxy war.

On Monday, Libyan fighters backed by Turkish firepower captured a major air base west of Tripoli, the capital, used drones to destroy newly arrived Russian air defence batteries, and on Thursday pressed their offensive by ousting Hafter’s forces from a key town south of Tripoli.

The triumphs marked a stunning reversal of fortunes for the United Nations-backed Tripoli government, which looked weak and badly besieged by Hafter until President Recep Tayyip Erdogan of Turkey sent troops and armed drones in January. “It’s Turkey’s Libya Now,” read the headline on a briefing posted by the European Council on Foreign Relations.

More than a year ago, Hafter began an offensive to capture Tripoli and appeared to have the upper hand in the conflict, positioning his foreign sponsors, including Russia, to play a major role in Libya’s future. But on Wednesday, triumphant soldiers loyal to the government in Tripoli paraded through central Libya with a captured air defence system, built by Russia and financed by the United Arab Emirates, in a pointed humiliation of Hafter’s two most powerful foreign backers.

Then, on Thursday, Hafter’s forces were driven out of Asaba, a small but strategic town they had held 100km outside the capital.

The UN envoy to Libya, Stephanie Williams, warned the UN Security Council this week that the escalating fighting, driven by a flood of foreign-supplied weapons, warplanes and mercenaries, risked “turning the Libyan conflict into a pure proxy war”.

Although Turkey’s dramatic gains this week appeared to change the course of the war, they were by no means conclusive. The fortunes of the players in Libya’s conflict have seesawed wildly since the fall of dictator Muammar Gadafy in 2011.

On Thursday Hafter (76), a self-styled field marshall and one-time CIA asset who has been compared by critics to Gadafy, vowed to strike back with what his air force chief called “the largest aerial campaign in Libyan history” against Turkish targets in Tripoli. “All Turkish positions and interests in all cities are legitimate targets for our air force jets,” the air force chief, Saqr al-Jaroushi, said in a video.

In reality, Haftar’s next move will be determined by his sponsors in Moscow, Cairo and Abu Dhabi, where the leaders who have backed his 14-month-old assault on Tripoli, which has killed hundreds of civilians and displaced 400,000 people, were scrambling to assess their support for a stubborn ally who has repeatedly spurned political talks.

Fathi Bashagha, the Tripoli government’s interior minister, told Bloomberg on Thursday that eight Soviet-era jets, escorted by two newer Russian fighter jets, had flown from a base in Syria to boost Hafter. A European official said he had received similar reports, but said it was unclear if the jets were Russian or Syrian.

Any overt Russian military action would be a significant escalation for Moscow, which until now has exerted influence in Libya through mercenaries from the Wagner Group, the private army with close links to the Kremlin that played a key role in Hafter’s advance on Tripoli last fall.

The European official said that the jets were most likely a signal from the Kremlin to Turkey to slow down its offensive and turn to a negotiated solution.

Russia and Turkey made a similar joint appeal in January, in advance of an international conference on Libya. But their calls were ignored by Hafter, who has often infuriated his allies by playing one against the other.

As world leaders met at the conference in Berlin on January 19th, Hafter’s biggest ally, the United Arab Emirates, had started a covert air bridge to send military supplies to eastern Libya. The cargo flights, many of them contracted through shell companies, are under investigation by UN officials charged with policing the international arms embargo on Libya, a UN official said.

The victories by the Turkish-backed forces have given them air superiority over Tripoli, and have left Hafter’s forces in western Libya with just one final stronghold in Tarhouna, southeast of the capital.

“We’ve had quite a change in the military balance,” said Wolfram Lacher, a Libya specialist at the German Institute for International and Security Affairs. “Taken together, this could have dramatic consequences for the morale of Hafter’s forces, and for the cohesion of his alliance.”

Turkey’s success struck alarm bells in Egypt, where President Abdel-Fattah el-Sisi is a bitter rival of Erdogan, a fellow autocrat, and where any suggestion that Turkey could leverage its new influence to establish a permanent military presence in Libya is a cause of widespread alarm.

As foreign powers meddle, ordinary Libyans continue to pay with their lives. Williams, the UN envoy, said that 58 civilians were killed in fighting between April 1st and May 18th, mostly by forces affiliated with Hafter. “Those guilty of crimes under international law must be brought to justice,” she said.

With the international community so divided on Libya, though, the chances of any true accountability appear vanishingly slim. The best hope for now, analysts say, is that a chastened Hafter might finally accede to political negotiations.

In a conversation on Wednesday, President Donald Trump and President Emmanuel Macron of France noted “worsening foreign interference” in Libya and “agreed on the need for urgent de-escalation”, the White House said in a statement. In the past, though, Hafter has preferred to double down on military action rather than turn to talks. Last month he publicly reneged on the Libyan Political Agreement, a UN-sponsored deal signed in 2015 that underpins Libya’s shaky national institutions, in what was viewed at the time as an effort to shore up his power base in eastern Libya.

“Europe’s window of opportunity in Libya is closing,” Tarek Megerisi of the European Council on Foreign Relations said. “It needs to move fast if it is to protest its role as a barrier against Russian encroachment, and prevent the development of another Syria-style conflict in its neighbourhood.” – New York Times