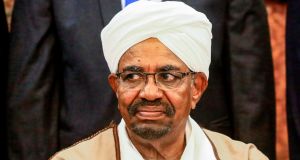 Omar al-Bashir: trial on corruption charges rather than genocide dismissed by many as a mere “sideshow”. Photograph: Ashraf Shazly/AFP

On Sunday, Sudan’s ousted dictator Omar al-Bashir will begin a trial on corruption charges, something dismissed by many of his victims and human rights groups as a “sideshow”.

Bashir – who was forced out of power in April, following months of protests – is accused of “possessing foreign funds, acquiring suspected and illegal wealth and ordering [the state of] emergency”.

The trial is expected to last weeks or months.

“I think most people think it’s not the most heinous crime committed by Bashir or his political officials,” said Ahmed Elzobier, Sudan researcher for Amnesty International. “Most are concerned about the crimes in Darfur especially: war crimes, crimes against humanity and genocide, that’s why we call for them to hand him over to the International Criminal Court to face these charges.”

For legal reasons, Bashir can’t be tried for war crimes or crimes against humanity in Sudan, Mr Elzobier said. “Legally in Sudan he could get away with it. Sudan at the moment is not prepared to charge Bashir with these war crimes.”

Conflict erupted in Darfur in 2003. According to United Nations estimates, up to 300,000 people were killed and 2.7 million displaced. The Janjaweed, the miltia responsible for mass atrocities, have since been incorporated into Sudan’s paramilitary Rapid Support Forces (RSF), which have held control in Sudanese capital Khartoum since Bashir was overthrown on April 11th.

Suffering continues in Darfur, Mr Siddiq said. Even now property is being confiscated by the RSF and people are being made homeless.

Mr Elzobier listed other crimes he says Bashir also needs to be prosecuted for, including Sudanese protesters being killed in the 1990s, and again in 2013. “Nothing happened to the people who were involved in that excessive use of force,” the Amnesty International researcher said.

Almost 80 protesters were killed more recently, in the months between protests erupting in December 2018 and Bashir’s removal in April. A thousands-strong sit-in protest in Khartoum was eventually violently broken up in early June.

On Saturday, Sudan’s main opposition group is due to sign a political agreement with the military council. On Sunday, they will name the members of a new leading sovereign council, and a new prime minister will be appointed on Tuesday.

Mr Elzobier said there were mixed feelings among Sudanese civilians about this. “Some people are happy and many are not happy . . . Some people completely reject what’s happening, saying this is a betrayal of the protesters and those who died. [They] don’t want the military involved. There are some people accepting that as a kind of compromise.”