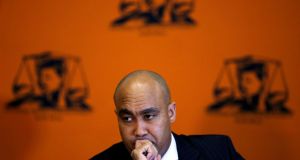 Shaun Abrahams: Since his appointment, he has been accused of displaying bias in favour of President Jacob Zuma around criminal cases, allegations Mr Abrahams denies. Photograph: Siphiwe Sibeko/Reuters

South Africa’s chief prosecutor Shaun Abrahams has been ordered to vacate his post by the high court after it ruled that his appointment by President Jacob Zuma in 2015 was unlawful.

The North Gauteng high court judges also ruled on Friday that Mr Zuma could not appoint the new national director of public prosecutions because he was “conflicted”.

Earlier this year, the supreme court of appeal upheld a 2016 high court ruling that Mr Zuma should stand trial on at least 18 counts of corruption linked to a multibillion-dollar arms deal the government negotiated in 1999.

“In our view President Zuma would be clearly conflicted in appointing a national director of public prosecutions considering the background of this case and the spectre of allegations against him,” judge Dunstan Mlambo said when handing down the judgment.

Mr Zuma was to have made representations to the National Prosecuting Authority around why the pending corruption charges should not be reinstated against him by the end of November.

However, there has been no word yet from Mr Abrahams’s office on whether he would follow the court’s direction and reinstate the charges.

Mr Ramaphosa, who is vying to become the ruling African National Congress party’s new president at its elective conference in two weeks’ time, has portrayed himself as a committed corruption buster during his campaigning for the position.

Friday’s ruling emerged from a case brought by the Council for the Advancement of the South African Constitution, Freedom Under Law and Corruption Watch. The rights groups applied to the courts to have Mr Abrahams’s appointment set aside because of the manner in which his predecessor was removed.

In November the court heard that Mr Zuma had “bullied” former national director of public prosecutions Mxolisi Nxasana out of office by using an inquiry into his fitness to hold the position.

Mr Zuma also gave Mr Nxasana an illegal golden handshake worth €1 million (17 million rand), which he has now been ordered to repay.

Since his appointment, Mr Abrahams has been accused of displaying bias in favour of Mr Zuma around criminal cases that have come before the courts. Mr Abrahams has denied the allegations.

Mr Zuma has indicated he will appeal the judgment.