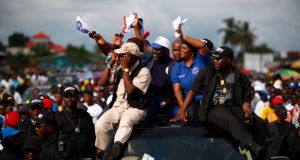 It’s a big day in Todee, a village deep in the bush of Montserrado County, in Liberia. Locals have packed into its hall to hear the renowned footballer George Weah pitch for their vote in Tuesday’s presidential election.

“Yaw yaw,” they shout, a chant specific to this village of subsistence farmers, which has neither running water nor electricity, as a tribal elder in batik dress welcomes Weah, the former AC Milan and Chelsea striker.

“They’re taxing our rice, bringing the prices up,” says Weah, who represents the Coalition for Democratic Change, viewed as the party of the country’s dispossessed. “They” are the incumbent Unity Party, in power since 2005, his main adversaries in the election.

“Yeah, taxing our rice!” shouts a woman in the crowd.

Liberia, one of the world’s poorest countries, is still recovering from a devastating 14-year civil war, which ended in 2003, leaving 250,000 people dead. The country, which relies on a mix of foreign aid and exports of iron ore, rubber, diamonds and gold, was just starting to get back on its feet when Ebola struck, in 2014. Today nearly 70 per cent live below the poverty line.

Often criticised for his awkward demeanour in public engagements, Weah comes across as quietly charismatic. But today he has something on his chest: accusations that he is under the influence of Charles Taylor, the warlord turned president, who is serving a 50-year sentence in a British prison for war crimes in the 1991-2002 Sierra Leone war.

Taylor, who has never been held accountable for crimes in his own country, invaded Liberia from Ivory Coast in 1989. Within a year his army had split into factions battling for control of territory and resources, raping, maiming and massacring as they went. He eventually became president in 1997 under the infamous slogan “He killed my ma, he killed my pa. I’ll vote for him.”

“There is propaganda on the Charles Taylor issue,” Weah tells the crowd. “But we are focusing on making a new Liberia . . . Our agenda is not a Charles Taylor agenda.”

Rumours of a Taylor-Weah connection have been swirling since last November, when Alan White, former chief of investigations for the UN-backed Special Court for Sierra Leone, claimed in a Voice of America radio interview that Taylor was talking to Weah in an attempt to get his sentence reduced and to ensure there would never be a special war-crimes court for Liberia.

There was further outcry when a recording emerged of Taylor making a birthday call to followers in Liberia from his prison cell early this year, telling them to “go back to base”.

Weah has strongly denied contact with Taylor. But his choice of Taylor’s former wife, Jewel Howard-Taylor, as a running mate has fuelled the controversy. Although Howard-Taylor is viewed as a formidable politician in her own right, she has alluded to bringing Taylor’s “agenda” back on the table during the campaign, comments that she later said were taken out of context.

“She’s a Liberian,” says Weah, referring to Howard-Taylor, a senator in vote-rich Bong County, to the north of the capital, Monrovia. “You can be a former wife of Charles Taylor, but that doesn’t mean we throw you out.”

Outside the hall Sam Manneh, an investment banker from Dallas, who is managing Weah’s communications, is nervous. The Irish Times had been promised an interview with Weah, but now Manneh says that he is too busy. “He has already been asked too many questions about Charles Taylor,” he says.

The residents of Todee seem unfazed by the accusations. Sylvester Snoe, a 43-year-old teacher, who resisted pressure to join the rebels in the 1990s, says that Weah will bring “infrastructure and development”. The Charles Taylor connection is propaganda, he says, adding that he believes the tyrant’s punishment was too harsh. “I admit he committed some atrocities and created some mayhem, but he’s our blood, so he should come home.”

Tenneh Sackie, who is selling chicken outside the hall, says it’s natural that Jewel Howard-Taylor should be advocating for her former husband. “When Charles Taylor was president the feeling was so good,” she says. “He did many things for Todee. He built a bridge.”

In Monrovia, Rodney Sieh, editor of Front Page Africa, the Liberian newspaper that published the recording of Taylor’s birthday call earlier this year, says that Weah and Howard-Taylor are “playing with people’s minds”, banking on the nostalgia vote from Taylor’s supporters. “People have an emotional attachment to Taylor,” he says.

Liberians also have an emotional attachment to Weah. “Taylor was a charismatic leader, but so is Weah,” says William Selmah, a journalist and sociologist. “Weah is the pride of the country. During the civil war, people said the only thing they had to be proud of was George Weah. While the country was bleeding, he was scoring goals.”

In Pleemu, a bumpy hour-long drive from Todee, crowds have gathered in the twilight with torches and lanterns. “We are in desperation,” says Zoe Nelson, who is 35. “I want Weah to be president. We have no light, no water. We’re tired of suffering. We want change in our life.”